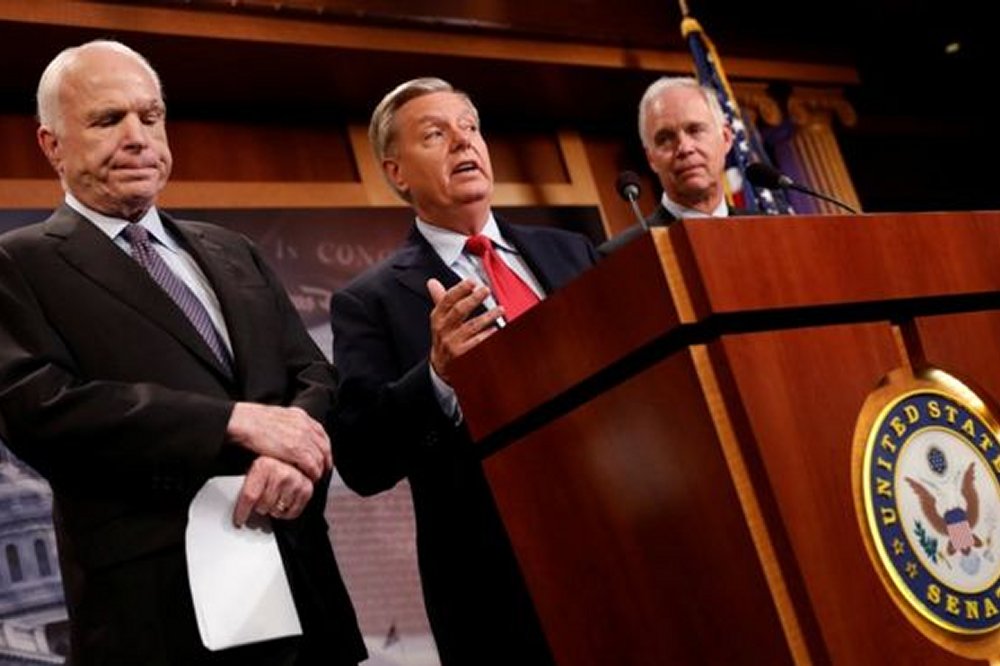 Republican Senators threatened to vote against the latest Obamacare repeal bill unless they received a guarantee it would be debated further.

Lindsey Graham, Ron Johnson, and John McCain’s votes would have been enough to scupper the bill’s chances.

The Senate and House have repeatedly disagreed on a series of healthcare bills ahead of summer recess.

House Speaker Paul Ryan seemed to accede to the demands, but said it was now the Senate’s job to produce a plan.

The senators wanted guarantees that the bill would be sent to a “conference committee” – a normal process when the House and Senate approve similar but slightly different bills.

But if the House simply voted to approve a Senate bill “as-is”, it would be sent to President Trump to be signed into law instead.

“If moving forward requires a conference committee, that is something the House is willing to do,” Paul Ryan said in a statement.

“The reality, however, is that repealing and replacing Obamacare still ultimately requires the Senate to produce 51 votes for an actual plan.”

Sen McCain told reporters it was “not sufficient” to allow him to vote for the bill.

But his fellow objector Lindsey Graham later said he had spoken to Mr Ryan and received a clear enough assurance to vote for the measure.

Another sceptic, David Perdue, said “the reassurance from Paul Ryan tonight is good enough for me”.

Shortly after the senators received their assurances, debate began in the Senate on the unveiled legislation, called the “health care freedom act”.

A small number of protesters gathered outside the US Capitol late in the evening as the proceedings started.

Inside the chamber, Democrats appealed to their peers across the aisle to vote against the move.

“There has never been a process as absurd as what we are seeing here,” Bernie Sanders told his colleagues.

Some chose to quote the critical words of the three Republican senators earlier in the evening.

In their news conference, the group had said they feared the House might blindly pass any version of the bill, “just because we have to get something done”.

“I’m not going to vote for a bill that is terrible policy and horrible politics,” Senator Graham said.

“Just give us the assurance that whatever we pass tonight will go to conference, so the good ideas… can get scored and have a chance to be argued,” Senator Johnson said.

The proposed health care freedom act is being referred to as a “skinny bill” – a cut-down version of the previous attempt, which would scale back some of the more controversial parts of Obamacare.

But some politicians are dissatisfied with the so-called skinny bill.

“The skinny bill as policy is a disaster,” Senator Graham said.

“I’d rather get of out of the way and have it collapse,” he added, “than have a half-assed approach where it is now our problem.”

The Senate is expected to work through the night on the healthcare bill.

Before it voted down the House version of the bill, President Donald Trump had urged senators to pass a bill – without indicating which one he supported.