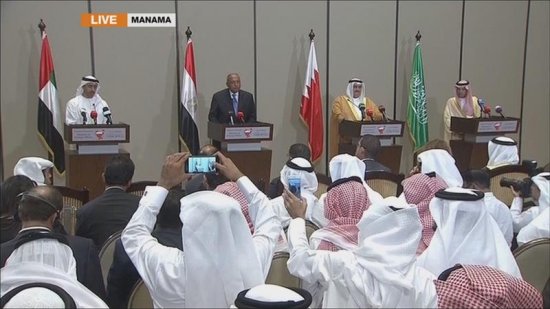 Four Arab countries boycotting Qatar will only enter dialogue to ease the dispute if Doha agrees to certain demands, and “fights terror”, the group said as they met in Manama.

High-level officials from Saudi Arabia, UAE, Bahrain and Egypt reiterated their positions on the GCC crisis, condemning Qatar what they perceive as Doha’s support for armed groups.

Qatar has repeatedly denied those allegations.

“The four countries are ready for dialogue with Qatar with the condition that it announces its sincere willingness to stop funding terrorism and extremism and its commitment to not interfere in other countries’ foreign affairs and respond to the 13 demands,” Bahrain’s Foreign Minister Sheikh Khalid bin Ahmed al-Khalifa said after meeting his counterparts.

The televised news conference in Manama comes more than one month after the Saudi-led bloc cut diplomatic ties with Qatar and imposed a land, sea and air blockade on the country.

As part of the boycott, the four countries also expelled Qatari expatriates.

The group on Sunday acknowledged that Qatari citizens had suffered as a result of their siege.

However, Saudi Foreign Minister Adel al-Jubeir refused to negotiate on a list of 13 demands on Doha – extended from an earlier list of six.

Scaling down relations with Iran, closing down Al Jazeera and shutting a Turkish military base which is currently under construction were included in that list of demands.

“[Qataris] speak of every issue except how to put an end to their support of terrorism,” said Jubeir, accusing Qatar of not being “genuine”.

“These demands are not negotiable. We cannot shrink [the list] down,” he said.

The bloc is only allowing Qatari pilgrims to fly to Saudi’s Mecca from an airport in Doha, making the journey challenging for those who live or work abroad, such as students.

“I think this press conference confirms that we are at the first day of the crisis. We have not moved for the last 50 plus days, we haven’t moved anywhere,” Mahjoob Zweiri, professor at Qatar university, told Al Jazeera.

Zweiri explained that the status quo is likely to prevail for now.

“We should expect reaction from Washington, Germany and the UK tonight or tomorrow. I think Tillerson will be upset after what he heard today,” he said, referring to Rex Tillerson, the US state secretary who has previously voiced support for Qatar.