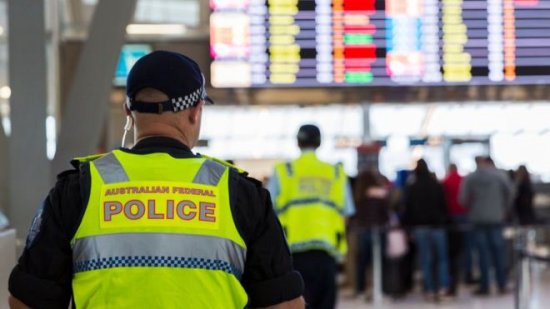 Two men accused of a terror plot to put a bomb on a plane were also trying to build a device that could release toxic gas, Australian police have alleged.

The men, aided by so-called Islamic State (IS), failed in a bid to smuggle an explosive on to an Etihad flight in Sydney on 15 July, authorities claimed.

They also allegedly plotted to build a gas “dispersion” device, but police said it was far from being realised.

Investigators said the alleged plots had been “completely disrupted”.

“This is one of the most sophisticated plots that has ever been attempted on Australian soil,” said Australian Federal Police (AFP) Deputy Commissioner Michael Phelan.

Mr Phelan said a “high-end” military-grade explosive had been concealed in luggage and taken to Sydney Airport on 15 July, but it did not get through check-in.

“There is a bit of conjecture [about] why it did not get through the baggage check-in, but I want to make it quite clear – it never got near [security] screening,” he said.

Police allege one of the suspects was put in contact with a senior IS figure in April.

The IS figure arranged for the components of the device to be sent to Australia from Turkey via air cargo, Mr Phelan said.

However, Mr Phelan said the plan was not close to fruition when police intervened on Saturday.

He said police had recovered components and chemicals.

Mr Phelan did not name a possible target for the device.

Two men – Khaled Khayat, 49, and Mahmoud Khayat, 32 – appeared via video link in a Sydney court on Friday charged with “preparing for, or planning, a terrorist attack”.

The pair not apply for bail during the brief hearing, which was adjourned until 14 November.

If convicted, they face a maximum penalty of life in prison.

The men were arrested along with two others on Saturday when police raided properties in the Sydney suburbs of Lakemba, Punchbowl, Surry Hills, Wiley Park and Bankstown.