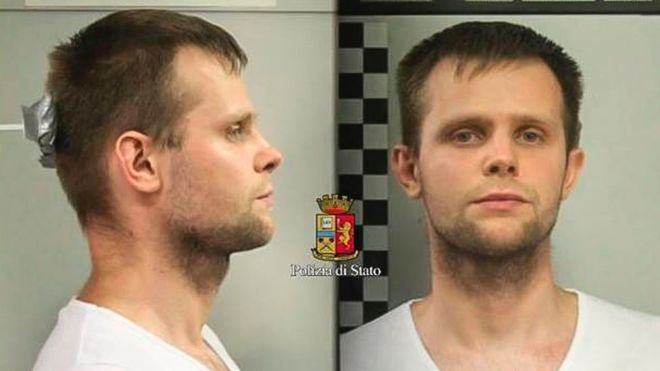 A British model was drugged and kidnapped in Milan to be sold in an online auction, say Italian police.

The woman, 20, had arrived in the city to take part in a photo shoot arranged through her agent, but was abducted and held captive for six days.

Polish national Lukasz Herba, 30, who lives in the UK, has been arrested on kidnapping charges, police said.

The Foreign Office said it was providing consular support to a British woman.

The model, who has not been named, arrived in Milan on 10 July.

She arrived at an apartment the following day for the shoot, where she was attacked by two men, said police.

Police said the woman was drugged, handcuffed and loaded into a bag and put into the boot of car which was driven to an isolated house in Borgial, northwest of Turin.

Italian prosecutor Paolo Storari said: “The victim was doped with ketamine – then she was locked in a bag and carried for hours in a car.

“Think what could would have happened if she suffered from asthma.”

The woman was kept handcuffed to a wooden chest of drawers in the bedroom for six days until she was released and taken to the British consulate in Milan, according to police.

Investigators said they discovered the kidnapper had organised several online auctions for the sale of abducted girls, which included a description and an opening price.

Police said it was unclear whether he had really abducted the victims or invented them for the auction.

The kidnapper used an encrypted account to ask the model’s agent for $300,000 to stop her from being sold in auction.

He claimed he was working on behalf of the “Black Death Group”, an organisation which operates in the deep web for illegal traffics, police said.

Investigations into the case are being carried out by authorities in Italy, Poland and the UK.

The kidnapper was captured by police as he was accompanying the model to the British Consulate in Milan, according to the Telegraph.