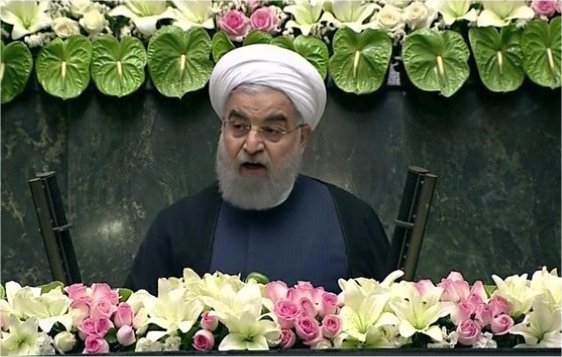 Iranian President Hassan Rouhani has warned US President Donald Trump he risks political suicide if he scraps the nuclear deal with Tehran.

At his swearing-in ceremony, Mr Rouhani said Iran would continue to abide by the terms of the deal as long as the other signatories do the same.

Last month the US state department announced new sanctions on the country.

The US says the sanctions relate to Iran’s missile programme and alleged support for terror groups but Tehran says they violate the nuclear deal.

Mr Rouhani – being sworn in for a second term after winning presidential elections in May – said he had nothing to do with “newcomers to the world of politics” and urged “old-timers” to see the nuclear deal as an example of how to manage international relations.

“Those who want to tear apart the JCPOA [nuclear deal] should know that they would also be tearing apart their political life,” he said in a ceremony broadcast live on state TV.

He accused the US of a “lack of commitment” to the deal and said it was an “unreliable partner”.

Meanwhile Iranian officials have been urging Europe not to side with the Trump administration.

Foreign Minister Javad Zarif said Mr Trump was “trying to destroy the nuclear accord at Iran’s expense” and said “Europe should be conscious of this”, private Tasnim news agency said.

Mr Rouhani won 57% of the vote in May’s election after promising to create jobs and build bridges with the outside world.

Last month, the US state department accused Iran of undermining stability, security and prosperity in the Middle East.

It criticised Iran’s support for the Syrian government and groups such as Hezbollah and Hamas and accused it of prolonging the conflict in Yemen by providing support for Houthi rebels.

The state department announcement came a day after the Trump administration certified that Tehran was complying with its nuclear deal obligations.