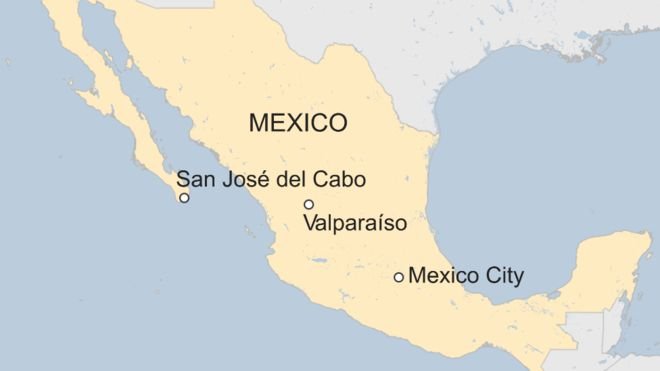 Gunmen have killed three people and wounded two others on a popular beach in north-western Mexico, officials say.

The victims, all men, were resting under a palm tree in San José del Cabo, in Baja California Sur state, reports say. Their identities have not been confirmed.

No arrests have been made. There was panic among tourists when the incident happened, witnesses say.

Mexico has seen a spike in violence in recent months.

The two wounded, a man and woman, were taken to a hospital, prosecutors said.

The Palmilla beach was evacuated following the incident. A tourist said: “We heard the shots and just ran to get somewhere safe. It was automatic weapons fire.”

In a separate development, a mass grave with the bodies of 14 people – 11 men and three women – was uncovered in a mountainous region of Valparaíso, in the northern state of Zacatecas.

Some of the bodies were dismembered, prosecutors said, adding that there could be more victims in the site.

DNA tests will be carried out in the bodies to determine their identities.

Experts say the latest violence may have been fuelled by the arrest of top drug cartel leaders, which has spawned independent criminal groups that have moved beyond drug trafficking into other crimes, including robbery and kidnapping.

Venezuela searches for rebels after deadly clash at army base