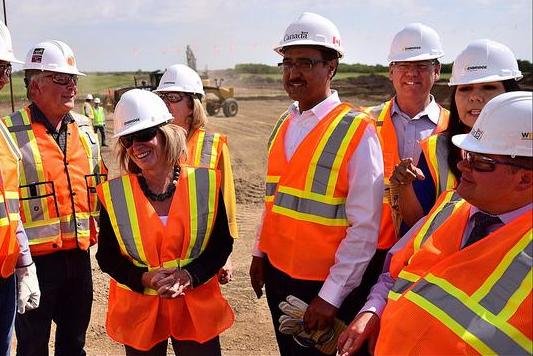 Canadian leaders said they were keen to build trade ties in the U.S. Midwest in the days leading up to negotiations on the North American Free Trade Agreement.

Chris Nielsen, a member of the legislative assembly from Edmonton, Alberta, leads a delegation on behalf of Trade Minister Deron Bilous to Minnesota to discuss the partnership with the 11 states that compromise the U.S. Midwest: Illinois, Indiana, Iowa, Kansas, Michigan, Minnesota, Nebraska, North Dakota, Ohio, South Dakota and Wisconsin.

“This program is an important opportunity to learn more about how our largest trading partner is making decisions and developing policy – as we work together to continue growing our economies and creating jobs,” Nielsen said in a statement.

For Alberta, about 196,000 jobs rely on trade with the Midwest, while more than a quarter million jobs depend on it on the other side of the border. Nielsen’s five-day trip ends one day before the start of negotiations on the North American Free Trade Agreement in Washington, D.C.

Canada counts on the United States as its top trading partner and is the top oil exporter to its southern neighbor and three oil and gas trade groups in North America said in a joint policy paper that “any changes” to the trilateral trade agreement put energy markets at risk.

Alberta oil and gas infrastructure feeds several markets in the U.S. Midwest, notably the Lakehead oil pipeline system, operated by Enbridge. The company is preparing work to replace more than 1,000 miles of its Line 3 segment of the pipeline that stretches into Wisconsin.

“Alberta is committed to being a global leader in environmentally responsible energy development, and energy infrastructure projects like this are essential to our future prosperity,” she said in a statement.

The Line 3 replacement program is the largest in Enbridge history. The project faced stiff opposition from some U.S. residents concerned about the environmental impact of the heavier grade of oil found in Alberta.

Number of asylum seekers to Canada up four fold in August

Canadian diplomat struck by headaches and hearing loss in Cuba