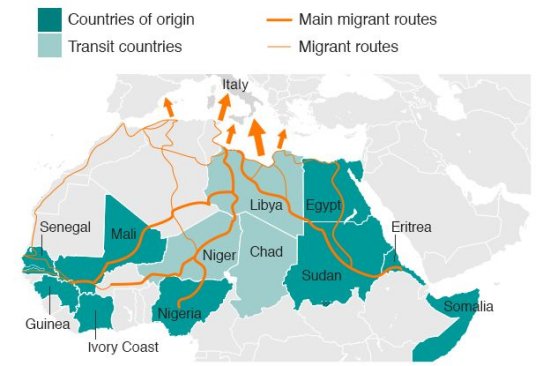 Three times as many migrants have arrived in Spain so far this year compared to the same period in 2016, the International Organization for Migration (IOM) says.

The shift may be because migrants are finding the Spanish route safer.

Earlier this week, footage showed migrants arriving by dinghy on a beach in Cádiz to the surprise of beachgoers.

“We assume that some of the change is due to the fact that the route [to Spain] is considered a safe route up to the coast through Morocco,” Joel Millman, a senior IOM spokesman, was quoted by AFP news agency as saying.

“It’s possible that Spain will outperform Greece this year,” Mr Millman said. “If so, that’s a big change.”

Many of those opting for the longer route to Europe are from west African countries including Senegal, Gambia, Guinea and Ivory Coast.

Spain is still far behind Italy, which received 96,861 until 9 August, according to the IOM.

Overall numbers have fallen by almost 60% from the same period the previous year.

On Thursday, coastguards in southern Spain said 10 men from sub-Saharan Africa were rescued off Tarifa.

The coastguard said they were on a rickety boat off the southern town of Tarifa, in Cádiz province, where a boat full of migrants landed at a popular tourist beach on Wednesday, stunning tourists.

According to AFP, nine of the 30 or so migrants who arrived on the beach on Wednesday had been found.

They are all minors in their teens and, while they did not have any ID on them, are thought to be from Morocco, police were quoted as saying.

They will be taken to migrant reception centres, where they can apply for asylum in Spain, AFP adds.

The charity Médecins Sans Frontières (MSF) says Spain’s reception centres are already overloaded and do not respond to the needs of the thousands of “desperate new arrivals”.

Earlier this year thousands of protesters called on the Spanish government to allow people fleeing war-hit areas such as Syria in the country.

Big Ben’s bongs to fall silent until 2021 for repairs