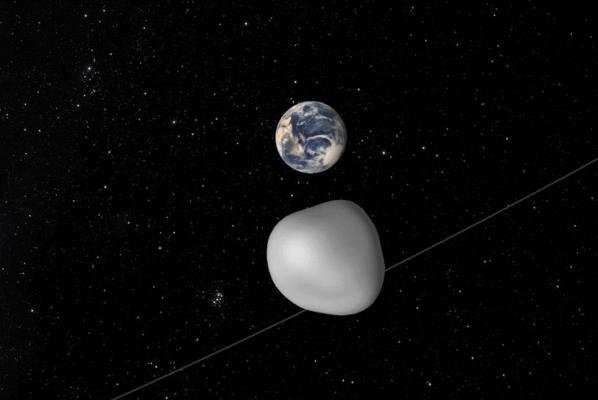 An asteroid measuring between 49 and 98 feet wide will pass within a few thousand miles of Earth on Oct. 12, according to NASA scientists.

Asteroid 2012 TC4 will pass inside the moon’s orbit around Earth, flying at an altitude of approximately 27,000 miles. The asteroid is currently flying at a speed of 30,000 mph.

While scientists aren’t sure of its precise fly distance, they are certain it poses no risk to Earth or its satellites.

The flyby will offer NASA scientists their first opportunity to test their collaborative astroid monitoring system, a network of observatories and scientists responsible for tracking near-Earth objects.

The monitoring campaign “is an exercise to test how well a diverse group of observatories can be brought together in a time frame appropriate for recovering and characterizing an asteroid that might present a danger to Earth,” Mike Kelley, NASA scientist and leader of the tracking effort, told UPI in an email.

“2012 TC4 does not pose a threat to Earth, but because it was observed only briefly at the time of its discovery, its orbit was not very precise,” Kelley said.

NASA scientists have previously tested their monitoring and emergency response coordination systems using hypothetical impact scenarios, but the October flyby offers researchers a chance to track and predict the size and trajectory of the previously detected near-Earth object in real time.

“A key ingredient of planetary defense is an effective communication network, not just within NASA, but between NASA, other government agencies, our international partners and the public through the news media,” Kelley said. “So the TC4 exercise is a useful test of PDCO communication plans as well.”

The asteroid 2012 TC4 last passed by Earth in 2012. It has been too faint to track during the last five years, but recently astronomers at the European Space Agency spotted the approaching space rock using the 8.2-meter telescopes at the ESO’s Very Large Telescope Observatory.

The asteroid completes an orbit around the sun every 609 days. October’s flyby observations will help scientists predict its trajectory when it swings back by Earth again in a few years.

Alcohol helps goldfish make through the winter without oxygen