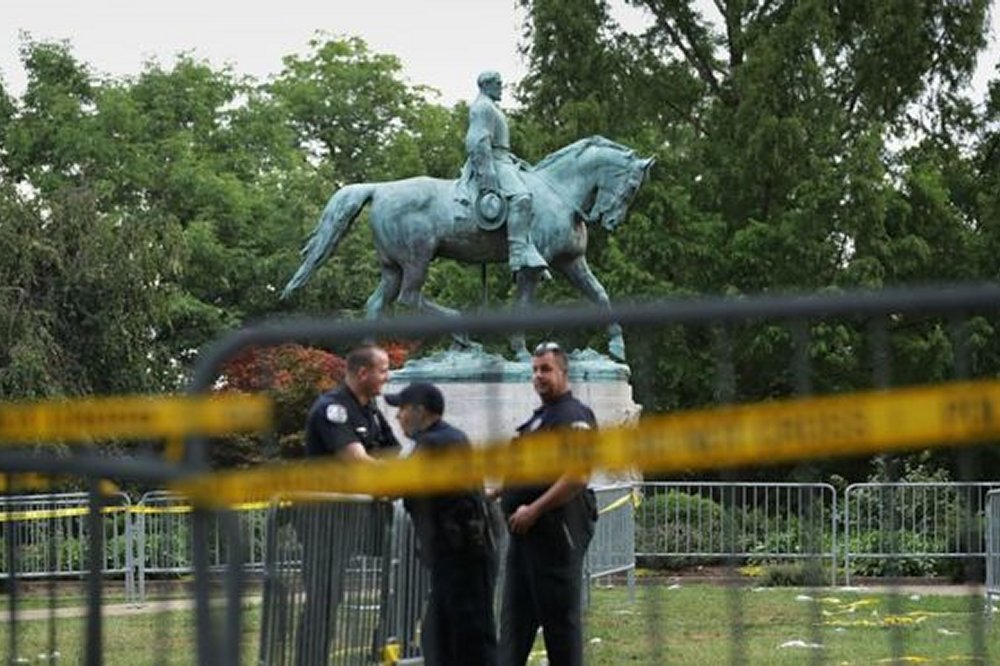 US President Donald Trump has denounced the removal of “beautiful” Confederate statues amid a heated national debate about US race relations.

“Sad to see the history and culture of our great country being ripped apart with the removal of our beautiful statues and monuments,” he tweeted.

“You can’t change history, but you can learn from it,” he continued.

Mr Trump drew outrage by defending organisers of a white supremacist rally that left a woman dead and dozens hurt.

The rally in Charlottesville, Virginia, supported by neo-Nazis and white supremacists, was in protest of the removal of a statue of Robert E Lee, a general who had fought for the pro-slavery Confederacy during the US Civil War.

It turned deadly when a driver ploughed into a crowd of counter protesters, inflicting fatal injuries on Heather Heyer.

“The beauty that is being taken out of our cities, towns and parks will be greatly missed and never able to be comparably replaced!”

The recent removal of controversial statues, including some to leaders of the pro-slavery rebellion defeated in the US Civil War, has been the latest flashpoint in racial tensions across the country.

Critics say monuments to the Confederacy are racially offensive, but supporters say they are important symbols preserving Southern heritage.

Maine’s Governor Paul LePage, a Republican, said on Thursday taking down Confederate statues is “just like” removing a monument to the victims of the 9/11 attacks.

But relatives of Stonewall Jackson, a Confederate leader Mr Trump mentioned in his Thursday tweets, wrote an open letter to the mayor of Richmond, Virginia, urging him to remove the statue of their great-great-grandfather and all other Confederate statues in town.

“While we are not ashamed of our great-great-grandfather, we are ashamed to benefit from white supremacy while our black family and friends suffer,” the pair wrote. “We are ashamed of the monument.”

Robert E Lee V, the great-great-grandson of the famous Confederate general, issued a statement condemning the violence in the wake of the statue removals.

“While the debate about how we memorialise figures from our past continues, we the descendants of Robert E Lee decry in the strongest terms the misuse of his memory by those advancing a message of intolerance and hate,” he said in a statement to the BBC.

“He never would have tolerated the hateful words and violent actions of white supremacists, the KKK, or Neo Nazis.”

The president’s comments came after a week of turmoil over his response to the violent clashes in the small Virginia town.

Mr Trump was criticised for blaming both sides for the violence, but belatedly condemned the white supremacist and neo-Nazi groups on Monday.

During a heated news conference on Tuesday he backtracked and again blamed left-wing counter-protesters for the incident, too.

Senator Tim Scott of South Carolina, the only black Republican in the upper chamber, said in an interview with Vice News that the president’s “moral authority” had been “compromised”.

“I’m not going to defend the indefensible… [Mr Trump’s] comments on Monday were strong. His comments on Tuesday started erasing the comments that were strong,” Senator Scott said.

Amid the fallout over the president’s response, corporate leaders and CEOs began resigning from two White House business councils.

On Wednesday, the Strategy and Policy Forum announced it would disband as Mr Trump said he would end the council as well as a manufacturing one.