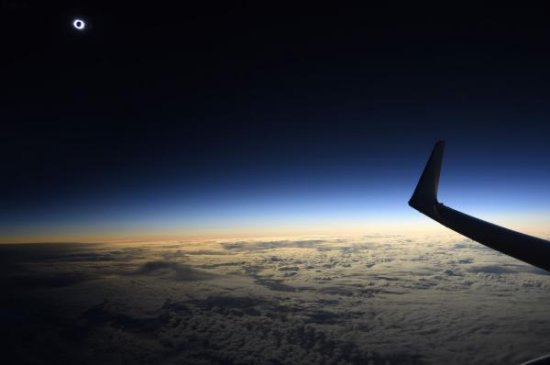 The best locations to see Monday’s total solar eclipse are within a day’s drive of more than 200 million Americans — and the mega event could see one of the largest mass migrations in human history.

The eclipse will occur on a sloping stretch of the United States about 70 miles wide and 2,800 miles long. The track beneath the eclipse is known as the “path of totality,” which includes the states where the phenomenon will be best viewed — Oregon, Idaho, Montana, Wyoming, Nebraska, Iowa, Kansas, Missouri, Illinois, Kentucky, Tennessee, North Carolina, Georgia and South Carolina.

“This path, where the moon will completely cover the sun and the sun’s tenuous atmosphere — the corona — can be seen, will stretch from Salem, Ore., to Charleston, S.C.,” NASA said. “Observers outside this path will still see a partial solar eclipse where the moon covers part of the sun’s disk.”

Experts believe the number of Americans who will hit the road for a better view could be the largest mass migration — for any event — in history.

As the last total solar eclipse over the United States occurred in 1979, the U.S. Department of Transportation is reminding people to use caution as they travel.

Thousands of eclipse-related events and viewing parties will be held across the United States — both inside and outside the path of totality — and road tripping to one of the states that will be directly under the path has caught fire on social media.

Experts say that when the eclipse arrives Monday morning, travelers should not stop on or park alongside highways, take photographs, or wear the opaque eclipse-viewing glasses while driving.

The Federal Highway Administration says drivers should get off the road to see the eclipse — and turn on their vehicles’ headlights so they can be seen during the blackout. About 12 million Americans live within the path of totality, and the agency expects between 2 million and 7 million Americans will make the trip.

Doug Hecox, spokesman for the FHWA, told UPI Thursday that there could be a “very large margin of error” considering there is no precedent for such an event. He said that for previous eclipses, only part of the country was affected; Monday’s will impact most of the continental United States.

“There has been nothing like this in the past 99 years. There really is no comparable data,” Hecox said. “In this particular case, this will affect the entire country.”

Hecox said the FHWA’s estimate of 2 million to 7 million travelers is conservative, as it uses information like daily traffic data, increases in hotel prices and parking shortages to extrapolate an estimate.

Hecox said the FHWA has been coordinating with state highway agencies for months in efforts to alleviate traffic, adding that states are using electronic signs to advise drivers about the eclipse’s effects. Many states are also allowing highway workers to take the day off for safety.

Drivers who find themselves approaching large cities, particularly Kansas City and Nashville, are being advised to allow for extra travel time because heavy traffic is expected.

Tamra Johnson of AAA said Monday’s historic event should be a memorable — and safe — one.

“Do not attempt to watch the solar eclipse while driving!” she said in an email to UPI. “The better option is to find a safe place to park. … The peak darkness phase will last just 2-3 minutes. Eagerness to view the eclipse is not an acceptable reason to drive aggressively or while distracted.”

On the West Coast, where gas prices are among the highest in the country, Oregon oil refiners are increasing production ahead of an expected tourist spike, AAA said. The Oregon Department of Energy estimates 1 million eclipse-seekers will flock to the state, which is expected to be one of the best viewing locations. There, the eclipse will begin around 9:05 a.m. PDT.

The national average for gas prices could increase due to higher demand as tourists flock to see the historic event. Rooms have also been selling out at hotels beneath the path of totality.

Perhaps one of the most intriguing methods to chase the eclipse is being offered in the skies.

Some airlines are offering special eclipse flights, which will give passengers a true bird’s-eye view of the event. Alaska Airlines is planning a special route out over the Pacific Ocean, off the Oregon coast.

“One of the best viewing locations will be aboard the Alaska Airlines eclipse-chasing flight,” the airline said. “Alaska Airlines’ eclipse-chaser pilots, along with astronomers, have done the necessary preparation to take invited umbraphiles to the path of totality over the Pacific Ocean.”

United Airlines, working with NASA, is planning to offer special views to passengers on three flights — two to Chicago from Houston and Miami and one from Cleveland to Denver.

Southwest Airlines has five morning flights under the path. On those routes, passengers will get special viewing glasses and “cosmic” cocktails.

“Not to throw too much shade but with 3,857 flights scheduled to operate that day using our all-Boeing 737 fleet, we’ll be unmatched in offering hundreds of seats in the air over the continental U.S. that morning with a potential view of the rare sight,” Warren Qualley, manager of meteorology for Southwest, said.