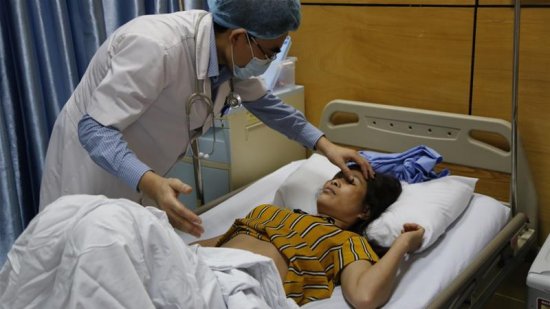 Vietnam is battling a raging dengue fever outbreak with more than 10,000 new infections reported over the past week.

The number of infected represents a 42-percent increase over the same period last year along with seven more deaths, the Ministry of Health said on Friday.

The ministry attributed the rise of dengue cases to higher temperatures, more rain, and rapid urbanisation that promote the breeding of virus-carrying mosquitoes.

Dr Vu Minh Dien of the National Hospital of Tropical Diseases in Hanoi, where the most severe cases are being treated, said hundreds of people have been checking in daily complaining of high fever.

“I have said some 800 to 1,000 people with suspected dengue fever checked in for examination each day,” he said.

Dien said some 300 dengue patients were being treated, stretching the hospital’s resources.

Tran Thi Xuyen, a fruit and vegetable seller in a small market in Son La province, said she did not know how she contracted dengue fever, which also infected her colleague.

“I took anti-biotics prescribed by the local district hospital for four days, but the fever did not go away and I admitted myself to this hospital where doctors said I had dengue fever,” she said from her hospital bed.

No cure exists for any of the four strains of the mosquito-borne virus that causes high fever, exhaustion, and in some cases a vicious skin rash. Patients most at risk of dying are the elderly, children, or those with other medical complications.

Hanoi and the southern commercial hub of Ho Chi Minh City are the hardest hit.

The government on Thursday urged residents to actively engage in killing mosquitoes and mosquito larvae, particularly at construction sites and housing for workers.

“The joint efforts by the people as well as our political system in searching and eliminating mosquito larvae, emptying water containers, which are fertile for larvae to breed, and spraying chemicals to kill mosquitoes are key factors to curb dengue fever,” Dien said.

Related Topics:AsiaVietnam dengue outbreak
Up Next