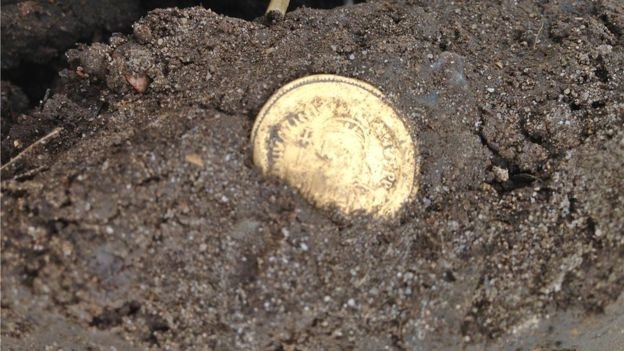 A rare 6th Century gold pendant created from a Byzantine coin has been found by a metal detectorist more than 1,500 years after it was made.

The coin is imprinted with an image of Emperor Justinian and is thought to have been made in Constantinople, which is now known as Istanbul in Turkey.

It was found by Godfrey Pratt in a field near Attleborough, Norfolk.

The metal detectorist said he had made some finds which were of archaeological interest but this one was “bling”.

Mr Pratt, who lives near the town, said: “I was amazed how perfect it came out of the ground… gold and sparkly.”

He has since informed the Norfolk Historic Environment Record (HER) and the county’s museum service.

Finds officer Dr Adrian Marsden said it was “rare” and made from high-quality gold.

Dr Marsden said: “What we’re looking at is a coin which was probably produced in the 530s or 540s AD.

“Later in its life it came over from the Mediterranean to Britain, was turned into a piece of jewellery and gone into the ground in a burial, probably as a very much-loved pendant.”

He said it could indicate there was a cemetery on the field where it was found.

“There could be more stuff out there, time will tell,” said Dr Marsden.

A similar-looking coin was found in North Elmham in Norfolk in 2013. That one was a French imitation of a Byzantine coin.

However, this latest find was the “real thing”, said Dr Marsden.

Mr Pratt started searching the site with a team from the Norfolk Heritage Recovery Group in Norwich as part of a project approved by the Norfolk HER.

The coin pendant will go to the coroner and then to the British Museum for valuation.