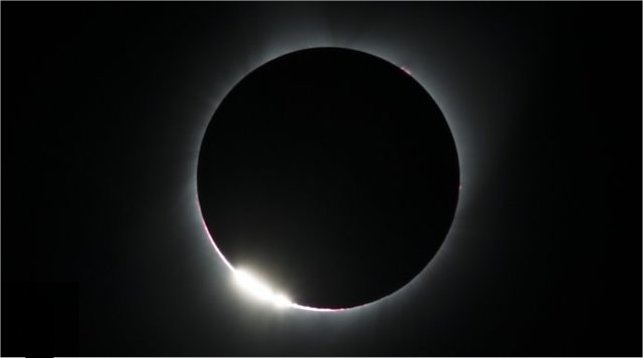 A total solar eclipse has wowed the US.

A huge shadow cast by the Moon as it passed in front of the Sun swept across the nation, from Oregon in the west to South Carolina in the east.

Millions of people moved to get into the path of darkness, putting on their protective glasses to gaze at the sky in wonder.

It was the first total solar eclipse visible from America’s lower 48 states in 38 years, and the first since 1918 to track from coast to coast.

The spectacle started in Oregon at 10:16 local time.

Skywatchers gathered on the coast witnessed the Sun’s disc being completely obscured by the Moon for two minutes.

But just before and just after totality, they also got to see some of the classic features of a total solar eclipse.

These included “Baily’s beads” which arise as the last shafts of sunlight drive through valleys on the Moon; and the “Diamond Ring”, which is the single brilliant point of light that signals the beginning and end of totality.

Small towns along the path were inundated with visitors. So were the National Parks.

In Carbondale, Illinois, city authorities billed the location as the “Eclipse Crossroads of America” because it would enjoy totality both on Monday and when the next US eclipse occurred in 2024.

As anticipated, it proved to be a huge magnet to visitors who made good use of the more than 60,000 extra car parking spaces organised for the day.

The Atlantic coastal city of Charleston was the final big urban area tasked with saying goodbye to the eclipse. It experienced the full shadow at 14:47 local time (18:47 GMT; 19:47 BST).

Although, the US had exclusive rights on totality, a partial eclipse was visible across all of North America and the north of South America.

Parts of western Europe were also set to see the Moon take a little chunk out of the Sun at the end of the day just before the star dipped below the horizon.

The next total solar eclipse on Earth is on 2 July, 2019, over the South Pacific, Chile, Argentina.

Related Topics:ScienceSolar eclipse 2017
Up Next