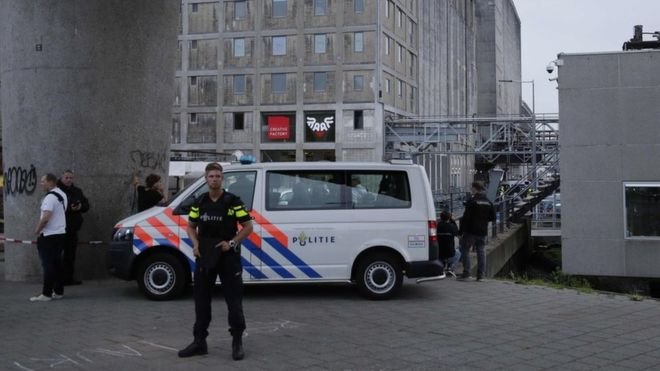 Police have arrested a 22-year-old man in the southern Dutch province of Brabant, hours after a rock concert was cancelled because of an alert from Spanish police.

The man was detained in the early hours of Thursday on suspicion of threatening an attack, said police.

The alarm on Wednesday centred on a gig involving US band the Allah-Las, due to perform in Rotterdam’s Maassilo.

A van containing gas canisters was found and its Spanish driver arrested.

The reported tip-off from Spanish police came amid a heightened alert less than a week after the jihadist attacks in Barcelona and Cambrils in which 15 people died.

Police wearing bulletproof vests were sent to the venue, which was evacuated.

A van with a Spanish number plate was stopped while driving erratically in a nearby street and a bomb squad was sent to examine the vehicle. Gas canisters were found inside and the driver was detained, but within hours Dutch authorities were playing down any potential link. The man was described by Dutch media as drunk.

The Spanish driver was said to be a mechanic who had the gas canisters in his vehicle as part of his job.

Hours later, at 02:00 (00:00 GMT), a special police unit raided a house in Brabant. In a statement (in Dutch), police said a man had been arrested and his home searched. No details were given of where in Brabant the raid took place or who the suspect was.

The Dutch DSI counter-terrorism unit is involved in the investigation.

The Allah-Las have often received threats because of their name and the Spanish warning led to the gig being called off at the last minute.

In an interview last year, the Allah-Las told The Guardian newspaper that they regularly received messages from Muslims offended by the use of the word Allah – Arabic for God – in the group’s name.

They said they had wanted a religious-sounding name after being inspired by the group The Jesus and Mary Chain.