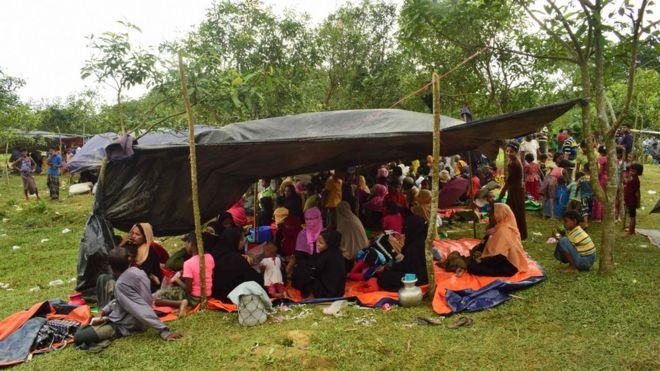 Aid workers giving emergency shelter and food say about a dozen of the new arrivals have recent bullet wounds.

Thousands more are waiting at the border, local sources say.

Many are thought to be trapped in an unoccupied zone between the countries.

At least 100 people, mostly insurgents, have been reported killed in the latest violence in Rakhine. Independent confirmation from the state is almost impossible as few journalists are given access.

The International Organisation for Migration said on Wednesday that about 18,500 Rohingya – mostly women and children – had crossed into Bangladesh since last Friday’s attacks.

Peppi Siddiq, a spokesperson for the IOM, told the BBC: “There are still thousands of people in no-man’s land and we have no access to that area.

“Some new arrivals have clothes with them, some even have kitchen utensils, but most leave everything behind. They need immediate shelter and food assistance.”

The authorities in Bangladesh have been turning many Rohingyas from Myanmar back – both countries say the Rohingya are not their citizens.

“The situation is very terrifying, houses are burning, all the people ran away from their homes, parents and children were divided, some were lost, some are dead,” Abdullah, a young Rohingya man who had made it to Bangladesh, told Reuters.

The attacks triggered a military crackdown that led to widespread allegations of killings, rape and torture of Rohingya, and an exodus of Rohingya into Bangladesh.

The UN is currently investigating alleged human rights abuses by the security forces, who deny wrongdoing.