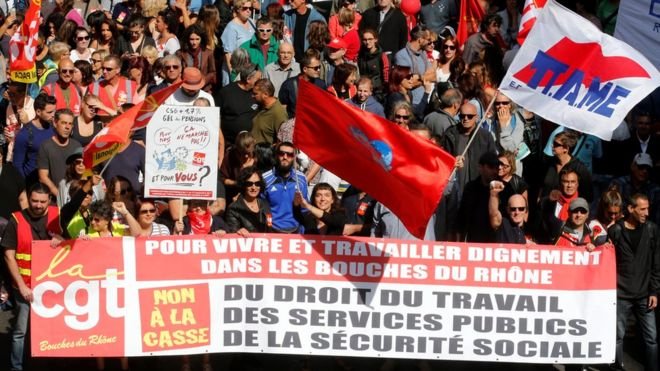 In the first big test of Emmanuel Macron’s presidency, protests have begun in cities across France against changes to the country’s labour laws.

Some 4,000 strikes have been called too, but two of the biggest unions have distanced themselves from the action.

Marches were due in Paris, Marseille, Lyon, Nantes and the other main cities.

However, President Macron missed the disruption, as he travelled to the Caribbean, to see the destruction wrought by Hurricane Irma.

He was due to visit St Martin and St Barts, which were among the islands worst hit by the hurricane last week.

The first marches took place in Marseille, Perpignan and Nice in the south, Bordeaux in the west and Le Havre and Caen in the north, each attracting a few thousand demonstrators. Scuffles were reported in Lyon as police tried to block the path of protesters.

Protest organisers were hoping for a big turnout in the centre of Paris, and called for workers at the Eiffel Tower to stage a strike. Services on regional trains were reduced but most intercity trains were running as normal.

Mr Macron came to power with a pledge to overhaul France’s enormous labour code and lower unemployment to 7% by 2022, down from its current level of 9.5%.

Mr Macron’s team announced the plans last month after weeks of consultations with unions and employers.

Last week, the president angered opponents with a remark on a visit to Greece. “I am fully determined and I won’t cede any ground, not to slackers, nor cynics, nor hardliners,” he said.

The prime mover behind Monday’s protests was the hard-left CGT union.

The demonstrations were not expected to be on the scale of those staged a year ago against the previous government’s attempts to reform the labour code. Two of the other biggest unions, CFDT and Force Ouvrière (FO), said they would not take part, although some local FO branches were planning to march against the reforms anyway.

A number of smaller unions are also involved, including the public sector union FSU, Solidaires, and student organisation Unef.

Some commentators pointed out the irony that many of those taking part in the protests had little to do with the private sector, which was what the reforms were all about.

Two left-wing leaders have thrown their weight behind the demonstrations.