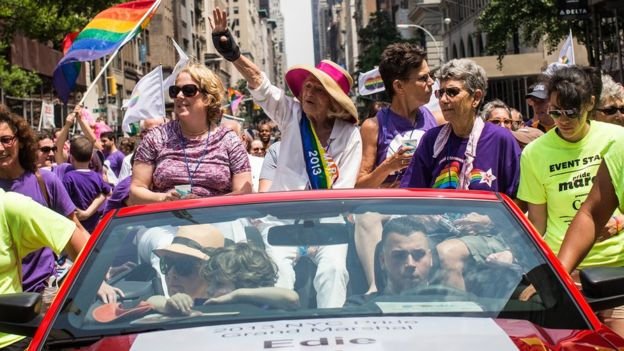 Her death was confirmed to the New York Times by her wife Judith Kasen-Windsor.

The couple had been partners for 44 years and had married in Canada in 2007.

Windsor, known as Edie, argued that the provision of the law which defined marriage as between a man and a woman prevented her from getting a tax deduction due to married couples – and was unconstitutional.

In a landmark 2013 ruling, the US Supreme Court agreed – and that decision became the basis for a wave of further court rulings increasing the rights of same-sex couples.

In 2015, another crucial Supreme Court ruling gave same-sex couples the right to marry.

Windsor died in New York. A cause of death was not given, but she had struggled with heart issues for years, the Associated Press news agency reported.

“The world lost a tiny but tough-as-nails fighter for freedom, justice and equality,” Judith Kasen-Windsor was quoted as saying.

“Edie was the light of my life. She will always be the light for the LGBTQ community, which she loved so much and which loved her right back,” Ms Kasen-Windsor added.

Mr Obama said in a statement: “America’s long journey towards equality has been guided by countless small acts of persistence and fuelled by the stubborn willingness of quiet heroes to speak out for what’s right.

“Few were as small in stature as Edie Windsor – and few made as big a difference to America.”

Bill Clinton tweeted that “in standing up for herself, Edie also stood up for millions of Americans and their rights”.

Windsor was born Edith Schlain in Philadelphia in 1929 to Russian Jewish immigrants.

She studied at Temple University and, after graduating in 1950, she married Saul Windsor, a friend of her brother.

The couple split after less than a year and Windsor moved to New York, where she worked as a computer programmer for technology giant IBM.

She met Spyer, her long-time partner, some years later. The pair joined activist gay and lesbian rights groups and participated in numerous marches and parades.

In 2009, Spyer died due to complications from a heart condition. Her death sparked a legal battle between Windsor and the US government which ultimately cemented her status as a pioneer for civil rights.