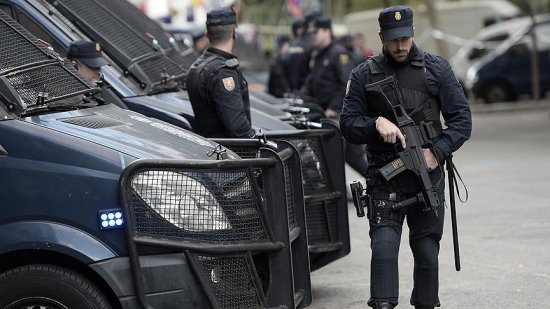 However, Spanish police and the country’s interior ministry would not confirm the arrests to Anadolu Agency.

The premises of Catalan economy and finance ministry, the foreign affairs ministry and the presidency were all searched.

“The moment has come. We will resist pacifically. Nonviolently, we will defend our institutions,” tweeted Jordi Sanchez, president of the Catalan National Assembly, a pro-independence group. He also called for activists to take to the streets.

The searches are a continuation of Tuesday’s operation, in which police seized a significant amount of documents (envelopes and instructional pamphlets) related to the referendum at Unipost, Catalonia’s biggest private mail-delivery company.

While police searched Unipost on Tuesday, scuffles broke out between officers and some of the approximately 200 people who gathered at the building to protest the search.