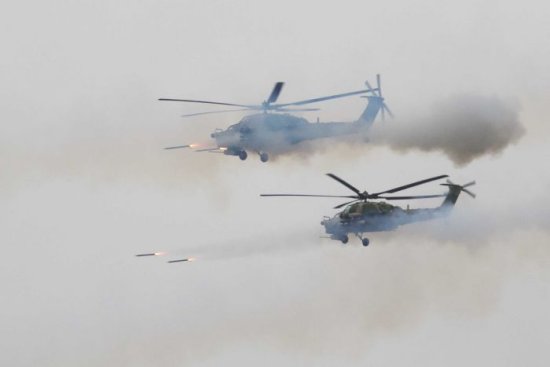 The Russian military acknowledged the incident, but insisted that no one was hurt and refrained from saying when it happened.

The video released on the online 66.ru news portal showed a pair of helicopter gunships sweeping low, with one of them firing a rocket that explodes next to a spectator on a parking lot.

It said Tuesday two people were wounded and two vehicles were destroyed in the incident during the Zapad (West) 2017 manoeuvres.

It said the accident happened Sunday or Monday at the Luzhsky range, about 100km east of the border with Estonia. The news portal said the video was provided by an unidentified witness.

Russian President Vladimir Putin accompanied by the top military brass attended the drills at the range on Monday.

The Russian military’s Western Military District acknowledged that the video was genuine, but denied that it happened on Monday. It did not specify when or where the incident in the video took place but said no one was hurt.

The military said the incident was caused by the failure of the helicopter’s targeting system.

The Zapad 2017 manoeuvres, held jointly by Russia and Belarus, got underway on Thursday at several firing ranges in both countries and run through Wednesday. The drills have rattled some NATO members, including the Baltic states and Poland, who have criticized an alleged lack of transparency about the war games and questioned Moscow’s intentions.

Related Topics:EuropeRussiaZapad 2017 manoeuvres
Up Next