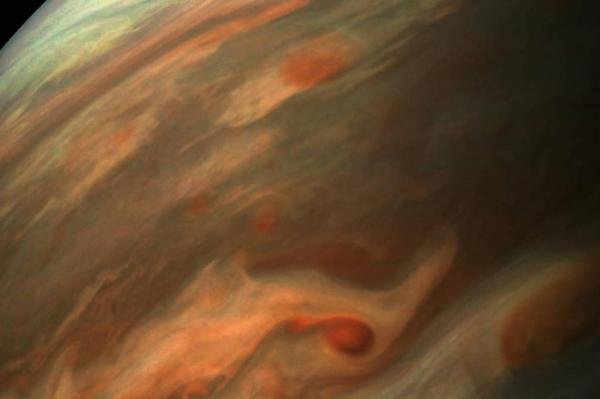 Jupiter’s atmosphere of swirling weather systems and wind currents looks rather languid in the latest image from the JunoCam.

The picture was snapped earlier this month by Juno’s imager and shared this week by NASA. The image was processed by citizen scientists Gerald Eichstädt. All of JunoCam’s images are available online in RAW form for citizen scientists to process and enhance.

NASA’s Juno spacecraft was 4,707 miles above the gas giant’s clouds when the image was taken. The probe was executing its eighth flyby when the photo was snapped. Juno’s flybys have secured a wealth of data for scientists at NASA to parse.

In July, Juno captured an impressive image of the gas giant’s famed Great Red Spot. With each flyby, researchers are learning more about the unique atmospheric phenomena that account for the gas giant’s unique appearance.

The first wave of scientific data and images, captured by Juno in May, revealed dozens of swirling storms on Jupiter’s north pole. The latest flyby, conducted earlier this month, was the probe’s eighth.

How Earth and Mars Were Born