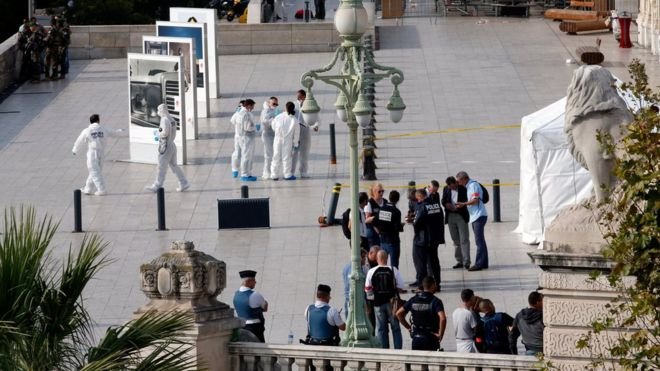 Two young women have been stabbed to death at Marseille’s main train station in a suspected terrorist attack.

Soldiers on guard at the station shot dead the attacker, who police described as of North African appearance and aged about 30. Witnesses said he shouted “Allahu akbar” (God is greatest).

So-called Islamic State (IS) said the attacker was one of its “soldiers”.

One victim had her throat slit and the other was stabbed in the stomach. They were aged 17 and 20.

President Emmanuel Macron said he was disgusted by the “barbarous act” and paid tribute to the soldiers and the police officers who responded.

The attack took place by a bench outside the southern French city’s Saint Charles train station.

Interior Minister Gérard Collomb told reporters that the attacker had fled after the first murder but returned to kill again.

Soldiers were already in the station as part of Operation Sentinelle, which sees combat troops patrol streets and protect key sites amid France’s ongoing state of emergency.

IS claimed it was behind the attack via its Amaq news outlet. The group regularly claims responsibility for militant attacks it believes are inspired by its ideology.

IS recently released a tape purportedly of leader Abu-Bakr al-Baghdadi in which he urged supporters to step up attacks.