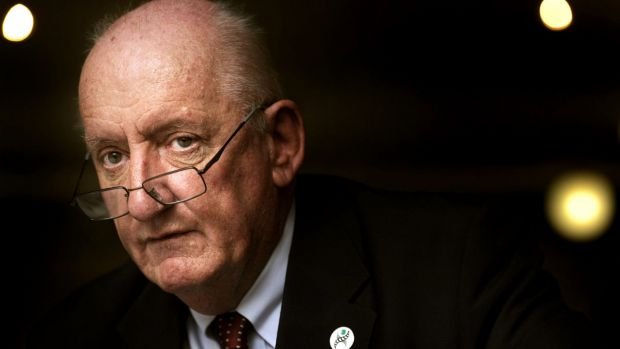 “The White House will produce slick statements saying now is not the time to enter any conversation on gun control,” Mr Fischer said on Tuesday.

“When is the time? After another Orlando, after another Las Vegas? Get real President Trump.”

Mr Fischer said he could not rule out any future Australian massacre after the death of at least 59 people in a shooting massacre in Las Vegas on Monday.

“But we have had 21 years since Port Arthur without a mass shooting,” he told Sky News.

Mr Howard increased the Medicare levy to pay for the buy-back of nearly 700,000 guns.

The decision caused deep division across the country, particularly in rural Australia, where Mr Howard was advised to wear a bulletproof vest and Mr Fischer faced prolonged voter backlash.

There were 13 gun massacres in Australia between 1979 and 1996, but since the push by Mr Howard and Fischer there have not been any, earning the policy bipartisan support.

“Thank God for our gun laws and heaven help anyone who wants to weaken these gun laws because they will have to come through me and the Labor Party.

“There is a lot of very good things about America but we don’t want their gun laws.”

“It’s a very, very difficult problem that we’ve been wrestling with for years and years … Every time one of these things happens, US analysts always point to what happened in Australia,” he said in Sydney on Tuesday.

“So I think certainly a lot of observers in the US look to the Australian example.”

Prime Minister Malcolm Turnbull said Australia had developed some of the strictest gun control laws in the world and we must “remain ever vigilant to maintain them.”

Mr Turnbull said he would be convening a special summit of state and territory leaders this week to discuss how to further strengthen and harmonise national security against the threat of terrorism and attacks on crowded places.

“Another national gun amnesty has just concluded, and in the first two months, over 25,000 weapons were handed in,” he said.

The national amnesty allowed gun owners to submit their weapons to authorities without fear of being penalised.

Australian Federal Police Commissioner Andrew Colvin said the amnesty may have finished, but gun owners can always hand in their firearms.

“Contact your local police, less guns in the community is a good thing,” he said.

Sydney and Melbourne could face 50C days ‘within decades’