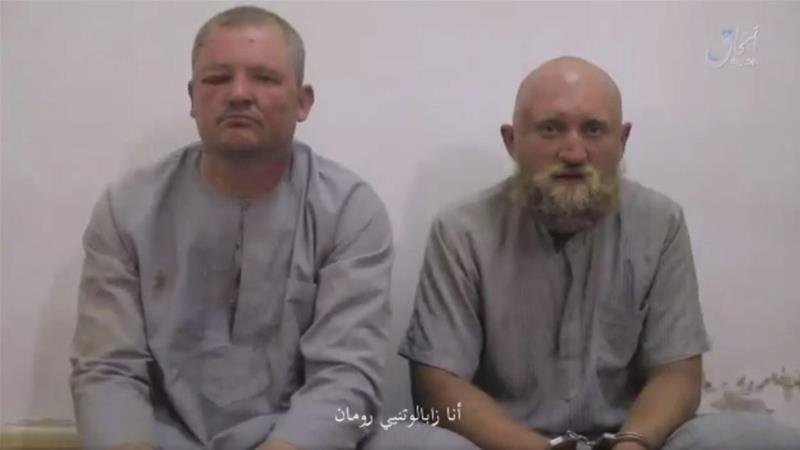 Dmitry Peskov, press secretary of the Russian presidency, said on Wednesday that the reports should be viewed with caution but confirmed that authorities were checking whether the two captives are Russian citizens.

Peskov’s statement came in response to a video released by the Islamic State of Iraq and the Levant (ISIL, also known as ISIS) group on Tuesday showing what the armed group claimed were two Russian men captured in al-Shalo village in Deir Az Zor province in eastern Syria.

In the video posted to ISIL’s Amaq website, a man speaking in Russian identifies himself as Roman Zabolotny from Rostovskaya region and says he was captured during an ISIL offensive in the village, along with the man sitting next to him, whom he identifies as Grigory Tsurkanu from Domodedovski region.

On Tuesday evening, Russia’s ministry of defence said in a statement to Russian news agency RIA that none of its military personnel located in Syria had been captured.

According to Russian media reports, Zabolotny is a member of a Cossack group called Aksayska yurta – Cossack organisations are nationalistic paramilitary formations and are regulated by a special law in Russia.

Russian media said Zabolotny and some of his fellow Cossacks tried to block the opening of a campaign office for opposition leader and presidential candidate Alexei Navalny in the city of Rostov-na-Don in April this year.

Tsurkanu’s brother, Roman, told local media that he was part of a private military company called Wagner and that he had been to Syria previously either in 2012 or 2013.

Wagner is the nom de guerre of Dmitry Utkin, a former Russian military officer and founder of the company.

In August 2016, Russian media outlet RBK reported that the use of Wagner mercenaries had cost Russia up to $170m since October 2015.

Maria Okuneva, a defence ministry spokesman, told Al Jazeera that she could not comment on whether Zabolotny and Tsurkanu are Russian military personnel.

According to Ruslan Leviev, a Moscow-based military researcher with Conflict Intelligence Team, both men are likely to be Russian mercenaries who were sent to fight in Deir Az Zor.

He told Al Jazeera that Russia – a backer of Syrian President Bashar al-Assad’s forces – uses mercenaries, who are mostly Russian citizens, at the front lines of Syria’s war. By placing them in heavy battles, Moscow can keep the official number of troops killed low, he said.

Deaths of mercenaries are not officially reported but according to Leviev, they could be in the hundreds.

Also on Tuesday, the Russian defence ministry announced that air raids by its fighter jets had killed 12 military commanders of the group formerly known as Jabhat al-Nusra (a previously al-Qaeda-linked group that is currently known as Hay’et Tahrir al-Sham, or HTS).

In a statement, it said it had also injured Abu Mohammed al-Joulani, head of HTS, claiming he had lost his arm and was in critical condition.

Later on Wednesday, HTS denied in a statement on its official Telegram account that Jolani had been wounded, saying its leader was in good health.

Aba Zeid confirmed that there were air attacks on Abu Alduhur airport and Reef Mohandeseen in the southern part of Aleppo province, where HTS headquarters are located.