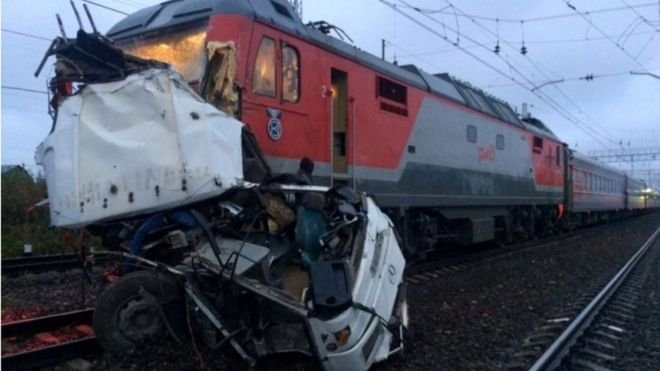 At least 16 people were killed when a train hit a bus on a crossing in the Russian region of Vladimir, 100km (62 miles) east of Moscow.

Russian media report that the bus engine may have stalled after the driver ignored a red warning signal.

Authorities said the driver had tried to get the 55 passengers from Uzbekistan to leave the bus.

The Russian Tass news agency reported that some escaped passengers attempted to move the bus before the collision.

It said all of those who died were on board and no train passengers were injured in the incident.

The Russian Investigative Committee revised the number of dead down to 16 on Friday morning, after regional health authorities originally said 19 had been killed.

“Other passengers, including minors, have been taken to hospital with various injuries”, a spokesperson said.

They said the number of dead and injured was still being assessed and that they have opened an inquiry.

The bus and the two drivers on board were reportedly from Kazakhstan.

Russian television reported that the passengers of the bus could have been migrant workers from Uzbekistan.

A spokeswoman for the regional governor’s office described the bus as being “literally torn apart” by the oncoming train.

Related Topics:EuropeRussia Train Crash
Up Next

Theresa May: I have full support of cabinet