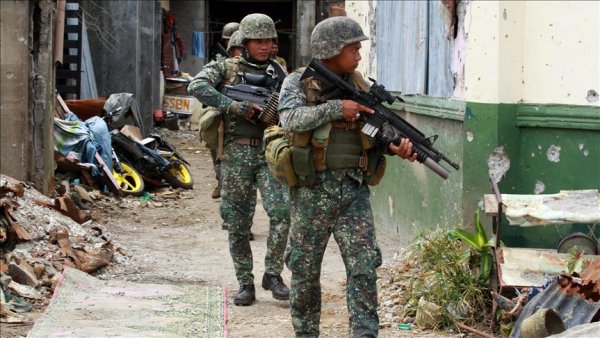 The combat strike operations led to the arrest of 20 armed local terrorists. The troops seized illegal drugs and components of improvised explosive devices in between the towns of Talitay and Midtimbang in Maguindanao over the weekend, according to Major Gen. Arnel dela Vega, Philippine Army 6th Infantry Division commander.

“The successful operation was a result of the focused and intensified military operation against local terror groups in Central Mindanao and the campaign against illegal drugs.”

In Tawi-Tawi, Abu Sayyaf, the kidnap for ransom group cell leader and his companion were killed by government troops on Sunday. While in Sulu, another militant who serves as the contact of the Daesh-linked terror group in its kidnap for ransom operations surrendered to the troops.

“When troops were about to serve the warrant of arrest, Idzri fired at them with a caliber .45 pistol prompting our troops to fireback at the target,” Parcon said in a statement.

Idzri and his unidentified Abu Sayyar companion were immediately brought to Datu Halun Sakilan Memorial Hospital but were declared dead on arrival. Recovered from them were a caliber .45 pistol and an automatic high-powered rifle including a magazine and ammunition.

The military tagged Idzri as the new leader of the Abu Sayyaf’s kidnap for ransom cell operating in Tawi-Tawi who was seen spotting for potential kidnap victims at the construction site of Diesel Powerplant in Bonggao, Tawi-Tawi.

Parcon said Idzri was formerly a close aide of the slain Abu Sayyaf sub-head Muamar Askali who was responsible for the kidnapping of German National Jurgen Kantner.

Misuari, a former follower of Misaya, who was earlier neutralized by government forces in Indanan town also laid down his Caliber .30 machine gun, Sobejana said.

“He serves as the local contact of the Abu Sayyaf and kidnap for ransom groups in the island of Banguingui,” he added.

Misuari revealed that there are more Abu Sayyaf members who are contemplating surrender as a result of the relentless operations and pressure employed by the military security forces to neutralize the Abu Sayyaf and kidnap for ransom members, particularly in the areas of Sulu.

Army Lt. General Carlito Galvez Jr., chief of the Western Mindanao Command, said current efforts are now being exerted by the JTF Sulu to facilitate the surrender of other Abu Sayyaf members under the group of Misuari.

The surrender of Misuari makes 24 the total number of Abu Sayyaf members who laid down their arms in Sulu since January 2017.

“The very good collaboration among our security sector, the local government unit and the peace-loving people in Mindanao resulted in this recent success. As long as everyone is united in fighting criminalities and terrorism, evil will never be able to thrive in every community,” said Galvez.

Government security officials are confident that they will be able to end the Marawi crisis this month.

The military had initially projected to end the crisis by September 30.

Colonel Romeo Brawner, deputy commander of Joint Task Group Ranao said there was no need to ask for another extension to the October deadline to end the crisis.

“We have information that some of the 40 remaining Maute group members in Marawi City are wounded,” he added. “There are at least eight foreign fighters commanding the remaining Maute members.”

Brawner said that what is complicating the situation is the remaining hostages of the Maute group.

After the rescue of 17 civilians last week, the military said there are only more than 20 remaining hostages.

The military clarified that there are at least 40 civilians still being held by the local terrorists.