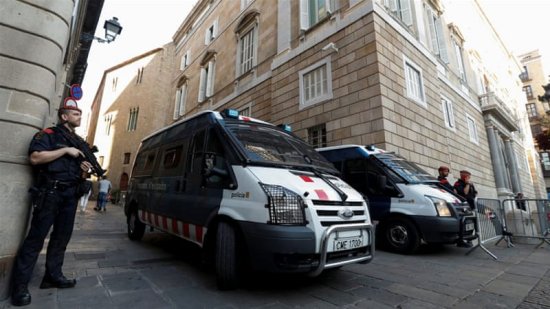 Barcelona, Spain – The Spanish government has given dismissed ministers and officials of the regional Catalan government “a few hours” to take their possessions from their former offices.

Madrid is assuming control over Catalan institutions on Monday after dismissing the regional government on Friday, hours after the Catalan parliament voted for secession. However, the Catalan government intends to go to work.

“We want to recover normality with the utmost discretion and with the principle of minimum intervention,” Juan Ignacio Zoido, Spain’s interior minister and a member of the right-wing People’s Party (PP), said on Monday.

Mossos d’Esquadra, the Catalan police force, informed ministry workers that they were ordered to escort ex-counsellors who intended to collect their things.

If the ex-counsellors do not leave their posts, the Mossos are to issue a statement to the authorities which would, presumably, lead to charges of “usurpation of functions”.

Spanish law says a person is committing a crime if they undertake the role of a public official without title or legitimate cause. The charge carries a punishment of one to three years in prison.

Catalan media reports that the Mossos first informed Josep Rull, a functionary of the Department of Environment and Sustainability, about the charge after he arrived at his ministry at around 10:00am local time.

The deposed Catalan President, Carles Puigdemont had yet to arrive at the government palace in Barcelona’s Gothic quarter on Monday morning.

Puigdemont’s Democratic Party of Catalonia is holding a meeting and the dismissed president is expected to be there.

Former Vice-President Oriol Junqueras has not been seen at the Ministry of Economy, which he headed before his dismissal.

A functionary of the Ministry of Economy, who asked his name not be used, confirmed to Al Jazeera Junqueras had yet to arrive and that the ministry has been dismissed without severance pay.

While the Spanish government has dismissed ministers and high-ranking officials, it does not have the power to dismiss the Catalan parliament. Instead, regional elections have been called for December 21.

Activists have gathered outside ministries to protect the former functionaries. No clashes between police and demonstrators have been reported.

The Mossos have become a symbol for many in Catalonia, due to their perceived resistance to orders from Madrid and their refusal to commit violence on October 1, the day of the disputed independence referendum.

It remains to be seen how demonstrators will respond to the Catalan police force’s consent to orders from Madrid.

The former head of the Mossos, Josep Lluis Trapero, was dismissed over the weekend.

He reminded his subordinates of their duty to respect their superiors.

Ex-Catalan president takes refuge in Belgium under threat of charges