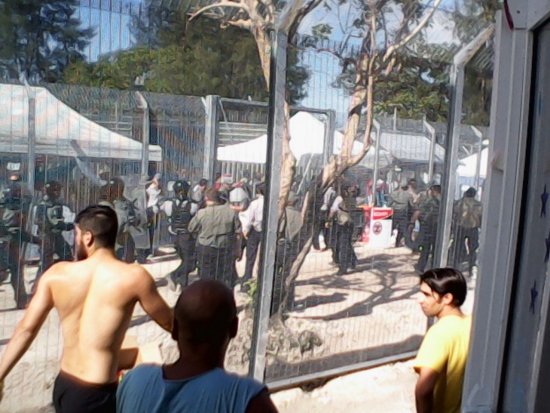 Hundreds of fearful refugees were urged to leave an Australian detention camp in Papua New Guinea Wednesday as conditions worsened with power and water cut in a tense standoff.

Canberra agreed to close its Manus Island facility by the end of October after the PNG Supreme Court ruled that holding people there was unconstitutional.

It was due to be handed over to local authorities on Tuesday, with some 600 men inside told to move to transition centres in the nearby town of Lorengau.

But many have locked themselves in, fearing they will not be safe outside where some in the local community do not want them.

Last week, Human Rights Watch released a report saying the Manus asylum seekers faced “unchecked violence” and that they “have been getting stabbed, beaten, and robbed” ahead of the October 31 deadline.

Staff have abandoned the camp, with electricity and water supplies cut, refugee advocates said. There have been reports of looting.

Iranian refugee Behrouz Boochani, who has lodged an affidavit in PNG’s Supreme Court trying to prevent the camp’s closure, said everyone was afraid after a restless night.

“There is not water, power and food. Even the toilets do not work,” he tweeted Wednesday morning. “People gathering in stress. Any time we expect that someone attack us.”

He also voiced concern for people’s mental wellbeing, saying one man had cut his wrist and chest with a razor, although this could not be verified.

They are barred from settling in Australia, even if found to be genuine refugees.

They have the option of returning home, moving to the Nauru camp, applying to be resettled in a third country like Cambodia or the United States, or make a life for themselves in PNG.

Australian Greens senator Nick McKim was on Manus island and said the transition facilities were not ready, sparking a furious rebuke from Immigration Minister Peter Dutton who accused him of spreading false information.

McKim, who said he was refused permission to enter the centre on Wednesday, returned fire, slamming Dutton as “a serial human rights abuser”.

“I’m actually the one here on the ground,” he told broadcaster ABC.

“I’m prepared to stake my political credibility anytime against the credibility of a monster like Peter Dutton.”

Australian Foreign Minister Julie Bishop urged those refusing to leave to do so, saying it made “no sense” for them to stay.

“The alternative accommodation… is providing all the essential services, including food and water and electricity and medical supplies,” she told Sky News.

She added that the PNG government “was in charge of law and order and security and I understand they have this matter in hand”.

McKim tweeted that PNG officials had told him there were no plans to remove detainees Wednesday after Immigration Minister Petrus Thomas moved to dispel fears force might be used.

“We are not going to move the refugees by force, it’s going to be a voluntary movement by refugees and non-refugees out of Manus Regional Processing Centre,” Thomas told the Post-Courier newspaper on Tuesday.

He added that Canberra must continue to look after asylum seekers’ welfare until their future was decided.

“That’s PNG’s position and we stand by it,” Thomas said.