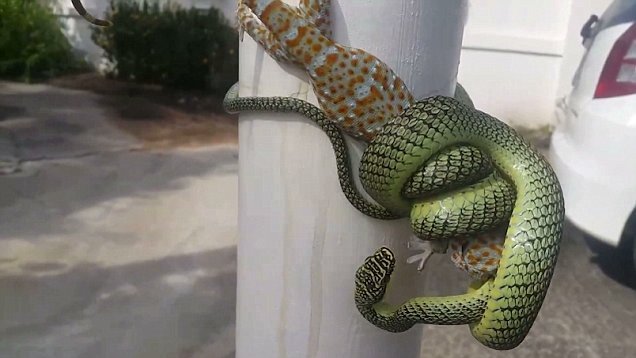 A British man living in Thailand captured video as he broke up a confrontation between a gecko lizard and a snake.

Daniel Batchelor, 54, who lives in Pattaya, captured video Nov. 9 when he went out to his garden and found the golden tree snake coiled around the gecko on a pole.

“The snake’s got the gecko and I don’t think I can do much to help it, and I love these geckos,” Batchelor says.

After verifying that gecko is still alive, Batchelor sets about trying to pry the reptiles apart while his wife, Nim, warns him that he’s likely to get a bite.

As he works to separate the animals, Batchelor discovers each is in the process of biting the other.

”The snake’s trying to let go. Let him go gecko, come on. We’ve got the snake’s tail but the gecko is not letting go so you can’t blame the snake for curling round him,” he says.

Batchelor is eventually able to yank the animals apart and send them on their separate ways.