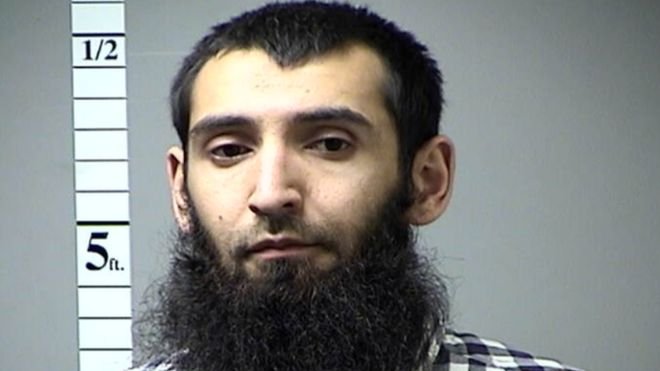 A man accused of killing eight people and injuring 12 after driving a truck into pedestrians in New York in October has pleaded not guilty to charges of murder and terrorism.

Sayfullo Saipov, who arrived in the US from Uzbekistan in 2010, entered his plea at a federal court on Tuesday.

Mr Saipov was arrested immediately after the 31 October Manhattan attack.

It was the deadliest attack on the city since the 9/11 terrorist attacks on the World Trade Center in 2001.

The most serious of the charges carry the death penalty, though prosecutors have not yet said whether they will seek it.

US President Donald Trump has repeatedly called for Mr Saipov to face the death penalty.

He appeared in court wearing a dark blue prison uniform with his feet chained.

A court-appointed lawyer spoke on his behalf and entered a plea of not guilty.

He was shot by a police officer immediately after the attack and arrested.

In a criminal complaint filed the day after the incident, prosecutors described how Mr Saipov had reportedly bragged about what he had done from his hospital bed.

According to investigators, he detailed how he had been inspired by propaganda videos produced by IS and had begun planning the attack a year earlier.

Mr Saipov also said he “felt good about what he had done” and asked to display the militant group’s flag in his hospital room, investigators added.

The next hearing in his case is scheduled for 23 January.