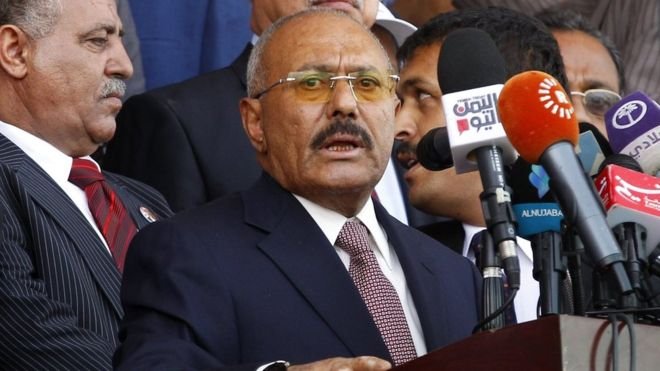 Yemen’s ex-President Ali Abdullah Saleh has been killed in fighting with his former allies, reports say.

Media controlled by the rebel Houthi movement quoted officials as declaring the “end of the crisis of the treason militia and the killing of its leader”.

Sources in Mr Saleh’s General People’s Congress party also confirmed that he was dead, according to Al Arabiya TV.

Pictures and video circulated online showed the body of a man resembling Mr Saleh with a severe head wound.

Until last week, Mr Saleh’s supporters had been fighting alongside the Houthis in a war against Yemen’s current president, Abdrabbuh Mansour Hadi.

But longstanding political tensions and a dispute over control of the main mosque in the rebel-controlled capital, Sanaa, triggered fierce clashes that have left more than 125 people dead and 238 wounded since Wednesday night.

On Saturday, Mr Saleh offered to “turn a new page” with the Saudi-led coalition backing Mr Hadi if it stopped attacking Yemen and ended its crippling blockade.

The coalition and Mr Hadi’s government welcomed the comments. But the Houthis accused Mr Saleh of staging a “coup” against “an alliance he never believed in”.

Overnight, Sanaa was rocked by coalition air strikes on Houthi positions and clashes on the ground involving heavy weapons as the conflict between the rivals escalated. Aid workers said the violence trapped civilians inside their homes.

Later on Monday, Mr Saleh’s house was blown up by Houthi fighters. It was not immediately clear whether Mr Saleh was inside the building at the time, but within a few hours reports began to emerge that he was dead.

Unverified video footage on social media appeared to show his body being carried on a red blanket by several armed men shouting “Praise be to God!” and “Hey Ali Affash!” – the name of Mr Saleh’s clan.

A statement by the Houthi-run interior ministry, carried by rebel-aligned media, later announced “the killing of the leader of treachery and a number of his followers”.

Sources from the General People’s Congress initially told Al Arabiya that Mr Saleh was “well”. But after the pictures of the body emerged, a party official told the Saudi-owned channel that he had been shot dead by a “sniper”.

Hakim Almasmari, editor of the Yemen Post newspaper, told Al Jazeera TV that Houthi fighters had opened fire on Saleh’s convoy as it passed through a checkpoint on the way south from Sanaa to his hometown of Sanhan.

The Houthis, who champion Yemen’s Zaidi Shia minority, fought a series of rebellions against Mr Saleh between 2004 and 2010. They also supported an uprising in 2011 that forced Mr Saleh to hand over power to his deputy, Mr Hadi.

Mr Saleh’s supporters formed a surprise alliance with the Houthis in 2014, when they seized Sanaa amid widespread disillusionment at the political transition and Mr Hadi’s failure to tackle corruption, unemployment and food insecurity.

In early 2015, the allies ousted Mr Hadi, forcing the president to flee initially to the second city of Aden and then to Saudi Arabia. The Saudi-led coalition responded by launching a military campaign to restore Mr Hadi’s government.

The conflict and a blockade by the coalition has also left 20.7 million people in need of humanitarian aid, created the world’s largest food security emergency, and led to a cholera outbreak that is thought to have killed 2,211 people since April.