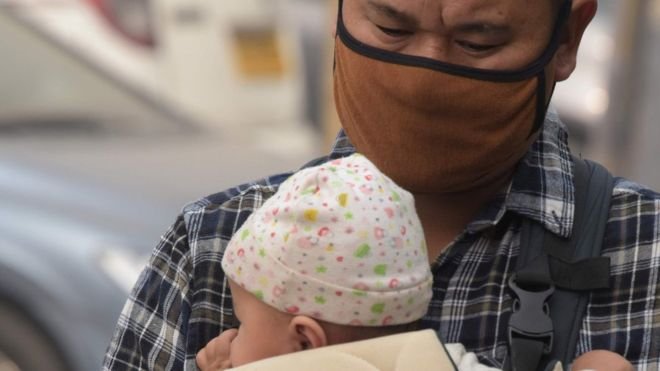 Seventeen million babies under the age of one are breathing toxic air, putting their brain development at risk, the UN children’s agency has warned.

Babies in South Asia were worst affected, with more than 12 million living in areas with pollution six times higher than safe levels.

A further four million were at risk in East Asia and the Pacific.

Its report said there was a link to “verbal and non-verbal IQ and memory, reduced test scores, grade point averages among schoolchildren, as well as other neurological behavioural problems”.

The effects lasted a lifetime, it said.

“As more and more of the world urbanises, and without adequate protection and pollution reduction measures, more children will be at risk in the years to come,” Unicef said.

It called for wider use of face masks and air filtering systems, and for children not to travel during spikes in pollution.

Some schools in the city were closed but there was criticism when they re-opened, with parents accusing the authorities of disregarding their children’s health.

Indian and Sri Lankan cricketers playing in Delhi vomited on the pitch during high levels of pollution.

In northern China, air pollution is estimated to cut life expectancy by about three years and the government has imposed tougher emissions rules on companies, although state media have reported that these are routinely flouted.

Satellite imagery used to compile the data also revealed that the issue was growing in African cities, Unicef said.

Meanwhile a separate study by scientists at hospitals in London found that the British city’s polluted air was leading to lower birth weights, linked to higher infant mortality and disease later in life.