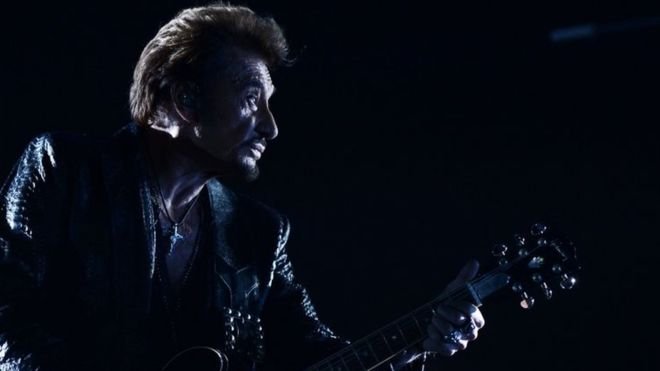 France’s biggest rock star Johnny Hallyday, who had lung cancer, has died, his wife says. He was 74.

The singer – real name Jean-Philippe Smet – sold about 100 million records and starred in a number of films.

He was made a Chevalier of the Legion D’Honneur by President Jacques Chirac in 1997.

The French simply called him “Our Johnny”. However, outside the Francophone zone, Hallyday was virtually unknown.

In a statement, his wife Laeticia said: “Johnny Hallyday has left us,” the AFP news agency reports.

“I write these words without believing them. But yet, it’s true. My man is no longer with us.

“He left us tonight as he lived his whole life, with courage and dignity,” she said.

Reacting to the news, French President Emmanuel Macron referenced the title of a recent tribute album by saying: “There is a little bit of Johnny in all of us.”

“Across generations, he carved himself into the lives of French people,” Mr Macron said. “He charmed them through the generosity you saw in his concerts: so epic, so intimate, in huge venues, in small spots.”

Among those to pay tribute was American guitarist Lenny Kravitz.

Farewell Dear @JohnnySjh. Your friendship, sweetness and support are imprinted in my heart. It is an honor to have known you and to have spent time with you and your beautiful family. Your soul is pure Rock and Roll. Repose en paix. ?: @candyTman pic.twitter.com/1ZAFUewHlo

“He introduced rock and roll to France. He’s one of the few singers about whom people say that he’s an animal on stage,” journalist Philippe Le Corre once said.

“He’s quite incredible. People of all ages like him,” he added.

Hallyday was nicknamed the French Presley by his numerous fans.

Despite his success at home, he failed to crack the lucrative American or any English-speaking market.

The USA Today newspaper once described him as “the greatest rock star you never heard of”.

Hallyday was known for his hard work and almost non-stop touring.

But he was also famous for his wild rock star antics, both on and off stage.

Related Topics:EntertainmentJohnny Hallyday
Up Next