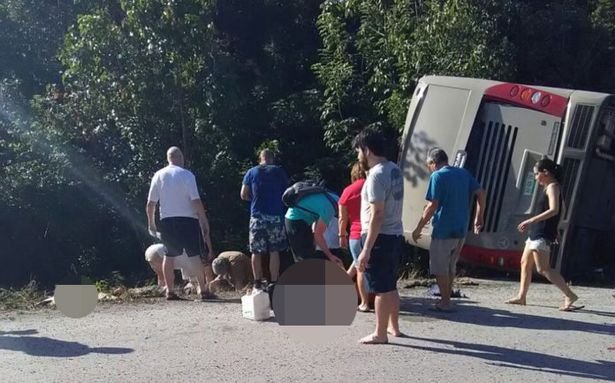 Another 20 people were injured in the crash on a road between Mahahual and Cafetal in Quintana Roo state.

The bus was taking 31 people, who were on a Royal Caribbean cruise, to the ancient Mayan ruin at Chaccobén.

The victims are reported to be nationals of several countries, including Canada, Italy and Sweden.

Also on board were the Mexican driver and tour guides.

The US embassy in Mexico said it was investigating whether there were American nationals on board.

Bus crashes are common in Mexico where people often travel along dangerous routes at night – but an accident involving the deaths of so many tourists in broad daylight is rare, the BBC Mexico correspondent Will Grant says.

It is not known what caused the crash. Photographs have now emerged showing the vehicle on its side with dazed survivors sitting nearby.

Emergency services are at the scene helping the injured.

We’ve seen reports of an accident involving a bus contracted by Royal Caribbean in Quintana Roo, Mexico. We express our condolences to all those affected. We are working with local authorities to determine if there were U.S. citizens on board.