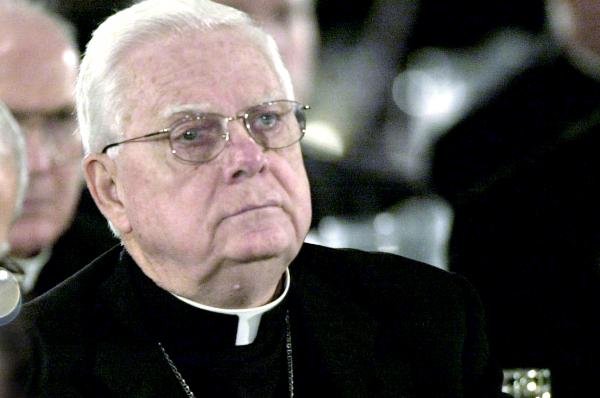 Cardinal Bernard Law, the former Boston archbishop who was forced to resign 15 years ago amid a major Catholic church sex scandal, died Wednesday. He was 86.

An announcement by the Vatican said Law died in Rome following a lengthy illness.

Law will receive a full cardinal’s funeral at 3:30 p.m.Thursday at St. Peter’s Basilica in Vatican City. Cardinal Angelo Sodano, the dean of the College of Cardinals, will celebrate the funeral Mass and Pope Francis will give a blessing.

Law was ordained as a Catholic priest in 1961 and appointed archbishop of Boston in 1984. He was a high-profile Boston figure who shocked the church when journalists reported he covered for pedophile priests by moving them to different parishes, instead of addressing victims’ claims.

The scandal became global after it was revealed by the Boston Globe’s “Spotlight” investigative reporting team that Law and bishops before him had covered for the pedophile priests. One of them, John Geoghan, was convicted of indecent assault and battery on a 10-year-old boy. Attorney Mitchell Garabedian represented 147 alleged victims of Geoghan.

The Globe team uncovered the abuse and won a Pulitzer prize for their coverage. A motion picture depicting the investigative reporting, Spotlight, won the 2016 Academy Award for Best Picture.

The archdiocese paid $10 million to settle 50 of lawsuits against Geoghan, and in 2003 agreed to pay $85 million to more than 500 claimants. Law, Boston’s eighth bishop and fourth archbishop, had not broken any laws in Massachusetts at the time.

After Law’s resignation in 2002, Pope John Paul II appointed him archpriest of the Patriarchal Basilica of St. Mary Major in Rome. His move to a second career at the Vatican was controversial and considered a “slap in the face” to the victims.

“Survivors of child sexual assault in Boston, who were first betrayed by Law’s cover-up of sex crimes and then doubly betrayed by his subsequent promotion to Rome, were those most hurt. No words can convey the pain these survivors and their loved ones suffered,” the organization said in a statement Wednesday.