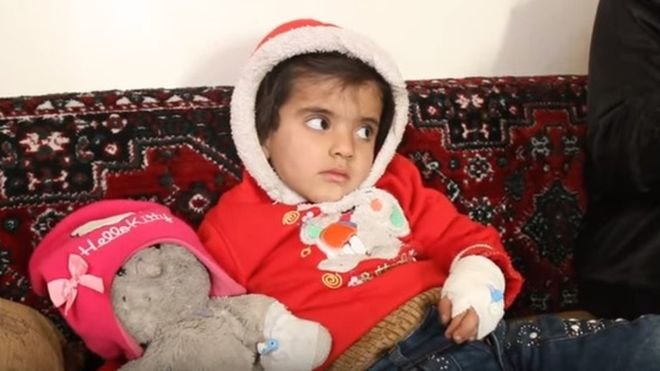 Syrian President Bashar al-Assad is considering a request to evacuate seven children with cancer from a besieged area, a British charity says.

Hamish de Bretton-Gordon, an adviser to the charity, told the BBC that Mr Assad’s private office had said he would decide next week.

The children are among more than 130 needing urgent medical treatment in rebel-held Eastern Ghouta.

The Damascus suburb has been under government siege for four years.

Earlier this month the Red Cross said life in Eastern Ghouta was becoming “impossible” and the situation there had reached a “critical point”.

The UN has been trying for weeks to arrange medical evacuations. Dozens of civilians are reported to have died in recent government bombardments and food shortages have led to severe malnutrition.

“We understand Assad is thinking about it. And we’re calling him back on Tuesday morning to speak to him direct,” said Mr de Bretton-Gordon, who advises the Union of Medical Care and Relief Organisations (UOSSM), which operates in Eastern Ghouta.

“And if he gives us the go-ahead then the plan is that we will get to Ghouta as quickly as we can, get the children.”

The seven children who could be evacuated include Rama, 4, who has lymphoma, is suffering from malnutrition and has a malignant tumour in her throat.

The last time she received the medication she needs was eight months ago, the UOSSM said.

Mr de Bretton-Gordon said the UN had told him that she and the other children could be treated elsewhere in Syria or abroad.

However, an evacuation would not include children in Eastern Ghouta with other medical conditions, such as two-month-old baby Karim, who lost an eye and suffered severe injuries in a reported government attack.

Photos of Karim have sparked a social media campaign to raise awareness about his and the other children’s plight. People in Syria and abroad have posted photographs of themselves covering their left eyes.

“The men with guns and power on the ground are denying us access to the most vulnerable. They are attacking civilians – including massively schools and hospitals. It’s been on both sides,” he said.

He called on Iran and Russia to put pressure on Mr Assad to allow the evacuations.

Nearly 12% of children in Eastern Ghouta are suffering from acute malnutrition – the highest level recorded in Syria since the war began – the UN says. Joint UN and Syrian Red Crescent aid convoys have not been able to deliver enough food for all 400,000 civilians trapped there.

Meanwhile limits on electricity, fuel, safe drinking-water and basic sanitation services are increasing the risk of outbreaks of diarrheal diseases, the UN says.

The area has been designated a “de-escalation zone” by Russia and Iran, the government’s main allies, along with Turkey, which supports the opposition.