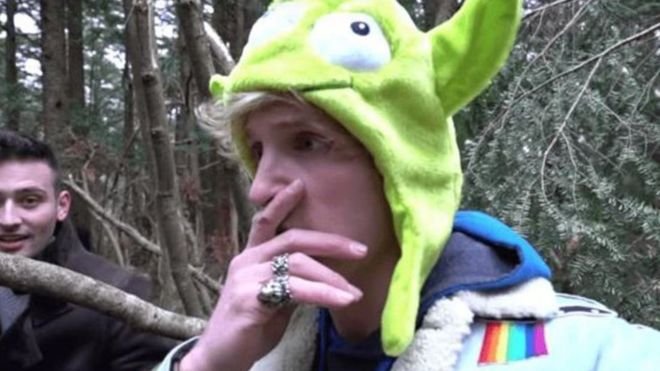 An American YouTube star has prompted a barrage of criticism after he posted a video which showed the body of an apparent suicide victim in Japan.

The video showed Logan Paul and friends at the Aokigahara forest at the base of Mt Fuji, known to be a frequent site of suicides.

Going in to film the “haunted” forest, they come across a dead body and are shocked, but also make jokes.

Online comments have called the video “disrespectful” and “disgusting”.

The video was uploaded on Sunday and had millions of views on Youtube before it was taken down.

Logan Paul, who has more than 15 million subscribers on Youtube, has since posted an apology on Twitter, saying he had been “misguided by shock and awe”.

Japan has one of the highest rates of suicide in the developed world.

Aokigahara has a tragic reputation in Japan and internationally as a destination for people who want to kill themselves.

The actual figure on suicides there each year is not made public, to avoid publicising the site. Signs are posted in the forest urging people to seek medical help rather than take their own life.

The 15-minute video is part of a series of posts from Japan where the US vlogger is on a trip with friends.

They go on a visit to the forest intending to focus on the “haunted” aspect of it, he says in the video.

After walking a short distance into the forest, the group come across a body.

The group is filmed approaching the body, which is shown in several close-ups where only the face is blurred out.

A member of the group is heard off camera saying he “doesn’t feel good”, Mr Paul then asks him: “What, you never stand next to a dead guy?”. He then laughs.

The identity of the deceased man is not known.