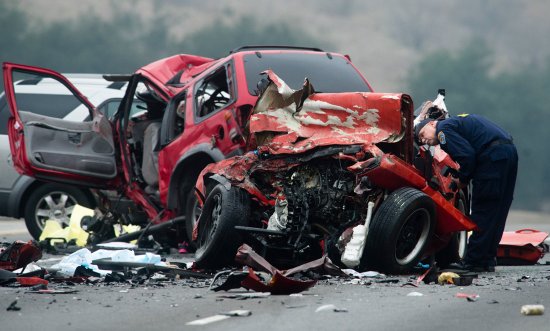 A woman driving the wrong way down a California highway caused a crash that killed six people, including herself, authorities said Sunday.

The unidentified driver was driving southbound in the northbound lanes of California’s Interstate 5 at about 12:30 a.m. on Sunday morning in Yolo County, near Sacramento.The driver crashed into a vehicle containing five passengers. When authorities arrived, both vehicles were up in flames, KCRA-TV reported.

“Everything was glowing from the fire and the emergency lights,” first responder Jeremey Morgan said. “So it was just this big flickering show. It looked like fireworks going off.”

Authorities have not determined if alcohol or drugs were involved in the crash, the Sacramento Bee reported. The accident remains under investigation.

The Federal Highway Administration says that there are between 300 and 400 people killed each year due to wrong way driving crashes, which represents approximately 1 percent of total traffic-related fatalities.

“While this is a small percentage overall, because WWD crashes involve head-on or opposite direction sideswipe crashes at high speeds, they tend to be relatively more severe than other types of crashes,” the FHA said.