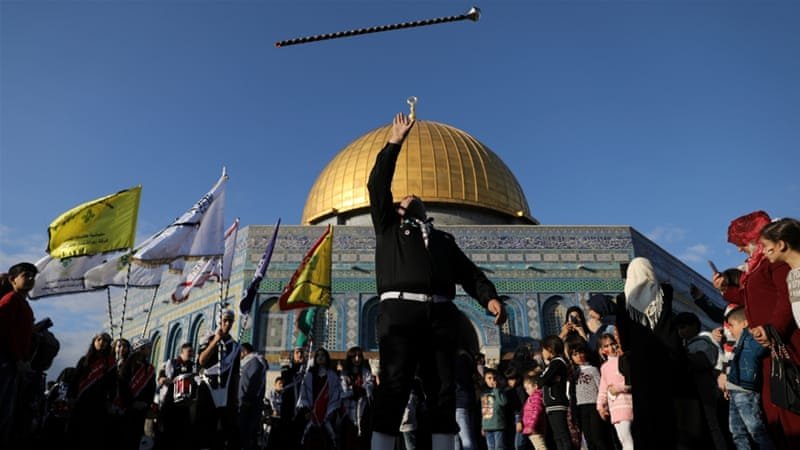 A Turkey-based TV station has released audio recordings it said were of an Egyptian intelligence officer asking influential hosts in Egypt to persuade their viewers to accept a US decision to recognise Jerusalem as Israel’s capital.

The recordings in Arabic, aired by Mekameleen TV late on Sunday, were first reported on by the New York Times and appeared to contradict Egypt’s public condemnation of the US move.

In the audio recordings, a man the Times identified as Captain Ashraf el-Kholi, tells the hosts that war with Israel was not in Egypt’s national interest, and asked them to play down opposition to US President Donald Trump’s move.

Egypt’s State Information Service has denied the Times’ January 6 report in a statement, saying its stance on Jerusalem remains unchanged.

Egypt’s positions “are conveyed by the president, the foreign minister and in official statements”, the statement said, adding that the Times does not provide evidence el-Kholi was an officer with the country’s intelligence service.

A Palestinian official also dismissed the content of the recordings on Monday.

Qais Abdulkarim, a member of the Palestinian Liberation Organisation’s executive committee, told Al Jazeera he believed Egypt continues to support the Palestinian cause.

He added, “I think the US is working intentionally to try to create an atmosphere which says that their move has been committed or taken with a tacit approval of certain Arab governments.”

Egypt was among one of the first countries to criticise Trump’s move, which prompted widespread international condemnation and deadly protests in the occupied Palestinian territories.

Cairo also submitted a resolution rejecting the move to the UN Security Council, but it was vetoed by the US.

The recordings released by Mekameleen, however, has cast doubt over Egypt’s position.

In a call with Saeed Hassaseen, a TV host and member of parliament, el-Kholi says he was laying out “the stance of Egypt’s national security apparatus and what it stands to benefit from in this matter of announcing Jerusalem to be the capital of Israel”.

“We like all our Arab brothers are denouncing this matter,” el-Kholi continued. “After that, this thing will become a reality.

“Palestinians can’t resist, and we don’t want to go to war. We have enough on our plate as you know.”

He went on to describe the reaction to Trump’s decision “dangerous” and said it could strengthen Hamas, the group that controls the Gaza Strip.

Egypt has long accused Hamas of supporting groups fighting its security forces in the Sinai peninsula, a region that borders Gaza and Israel.

“An Intifada [uprising] would not serve Egypt’s national security interests because an Intifada would revive the Islamists and Hamas,” el-Kholi said.

The Times said Hassaseen backed out of an interview on the issue.

El-Kholi’s other conversations followed a similar line and were with Mofid Fawzy, who denied speaking to el-Kholi, and with Egyptian actress Youssra.

Host Azmi Megahed, the fourth person el-Kholi spoke with, confirmed the conversation to the Times.

In his call with Megahed, el-Kholi suggested that the Palestinians should be happy with the occupied West Bank city of Ramallah, home to the Palestinian Authority.

“How is Jerusalem different from Ramallah, really?” el-Kholi said.

He also asked Megahed to say that it was Egypt’s regional rival, Qatar and its ruler, Emir Tamim bin Hamad Al Thani, who were guilty of collaborating with Israel.