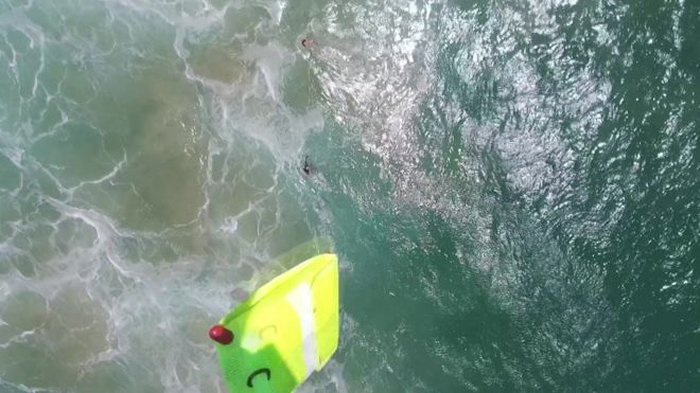 Two teenage boys were rescued by a brand new lifesaving drone in Australia while lifeguards were still training to use the device.

The swimmers, aged 15-17, had got into difficulties off the coast of Lennox Head, New South Wales (NSW).

A member of the public spotted them struggling in heavy surf about 700m (2,300ft) offshore.

Lifesavers instantly sent the drone to drop an inflatable rescue pod, and the pair made their way safely to shore.

John Barilaro, the state’s deputy premier, praised the rescue as historic. “Never before has a drone fitted with a flotation device been used to rescue swimmers like this, he said.

Lifeguard supervisor Jai Sheridan was piloting the device when the alarm was raised. He described the experience as “unreal”.

“The Little Ripper UAV certainly proved itself today, it is an amazingly efficient piece of lifesaving equipment and a delight to fly,” he told the Sydney Morning Herald newspaper.

Mr Sheridan said it took just a minute or two to launch the drone, fly it to the rescue site, and drop the pod.

Any other day, reaching the teenagers could easily have taken three times as long.

Sydney swelters in hottest day since 1939 as mercury hits 47.3C