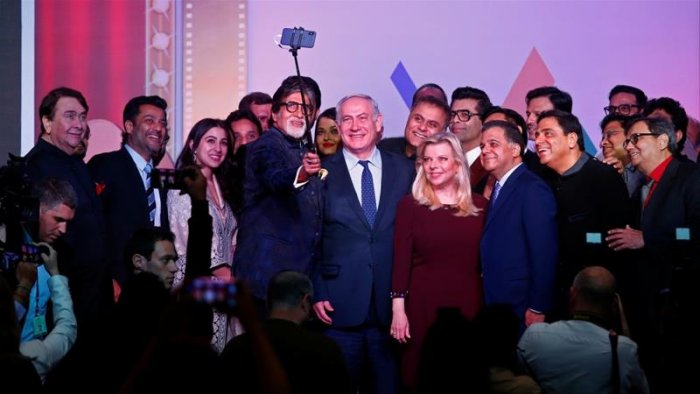 “We believe in Bollywood. World loves Bollywood. Israel loves Bollywood. We want Bollywood in Israel. We are putting our money where our mouth is,” Netanyahu said at the event before asking the stars in attendance to join him on stage for a selfie “like the one at the Oscars”.

Mumbai’s multi-billion dollar Hindi film industry is the largest in the world. India produces 1,900 films a year on average.

Among those in attendance at the event at a luxury hotel in India’s commercial capital were Prime Minister Narendra Modi, actor Amitabh Bachchan, and actress Aishwarya Rai.

Welcoming Netanyahu to India, Bachchan, one of India’s most popular actors, said: “May cinema further fructify the strength of ties between India and Israel.”

The connection with Bollywood, if it takes root, could work as an effective global media tool for the right-wing Israeli government. “Shalom Bollywood” is part of an official push by the Jewish state to improve its image abroad.

Israel is asking Indian filmmakers to produce movies in the Middle Eastern country.

Ronnie Screwvala, a prominent Bollywood producer, hailed closer ties between the Indian and Israeli film industries as “a lovely move”.

“Israel is rich in history, religion, culture. We share a lot of common threads. We are both very entrepreneurial countries,” he told Al Jazeera.

But some Indians questioned Bollywood’s leading players not bringing up Israel’s decades-long occupation of Palestine, or its years-long siege of Gaza.

“This is a commercial bargain,” said Subhasini Ali, a member of India-Palestine Solidarity Committee.

“Unfortunately, people in public life in India do not come out in support of principles which might displease the ruling regime. Contrast this with the brave actors, celebrities outside India who publicly voice concerns against injustice.”

“Unlike other Indian industries, Bollywood tends to stay apolitical in the interests of self-preservation and financial gain,” Vetticad said.

“It is worth asking whether Israel thought it safer to woo Bollywood than other major industries such as Kollywood and Mollywood [regional film hubs], where at least some major stars may possibly have embarrassed the country by rejecting its overtures and speaking up in favour of the Palestinian cause,” she said.

Filmmaker Anand Patwardhan, who was part of a “Netanyahu Go Back” protest in Mumbai on Thursday, told Al Jazeera “real India will remain the real friend of the real people of Palestine, be they Muslim, Christian or Jew”.

Modi’s Hindu nationalist government has rolled out the red carpet for Netanyahu during his first India trip that began on Sunday.