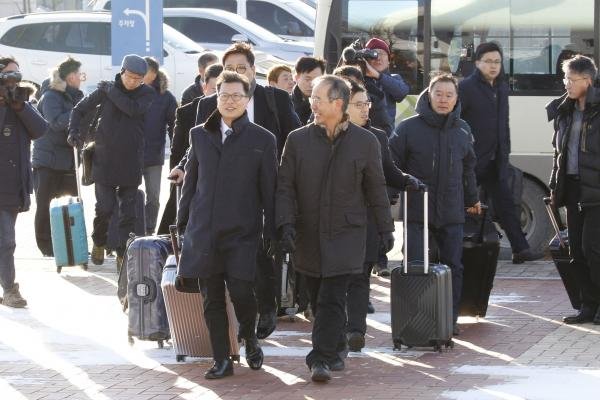 The Pyeongchang Winter Olympics could open with a performance of North Korean artists, a Seoul official suggested on Tuesday.

The senior government official said Seoul proposed the North’s cultural delegation stage one of its two performances on the eve of the Pyeongchang Olympics or on the opening day in the sub-host city of Gangneung.

The second concert in Seoul is likely to be held two to three days afterwards, before the Lunar New Year holidays begin on Feb. 15.

The South is waiting for Pyongyang to confirm the dates.

During a recent inter-Korean meeting, the North said it would send a 140-member arts troupe as part of its Olympic delegation.

A seven-member advance team led by North Korean pop star Hyon Song-wol made a two-day visit to the South on Sunday to examine various venues for the two performances.

Meanwhile, a South Korean delegation visited the North on Tuesday to inspect facilities and venues where the two Koreas will hold cultural events and joint training sessions for skiers ahead of the Olympics.

This marks the first time in two years that Seoul officials visit the North after the joint Kaesong Industrial Complex closed down in 2016.

The 12-member team will return to the Seoul on Thursday while another North Korean advance group will also travel to the South to inspect Olympic venues and accommodation for athletes.