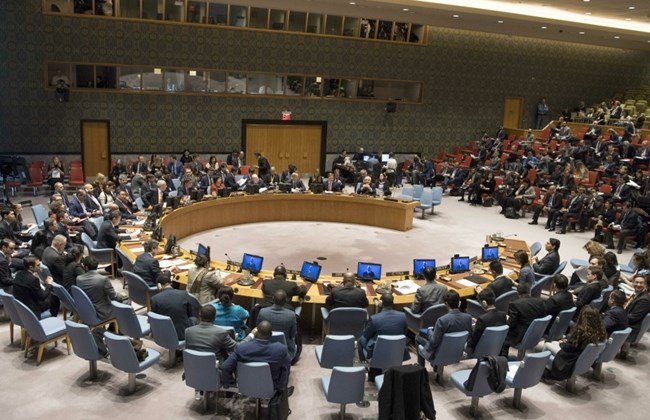 The U.N. Security Council Tuesday maintained an arms embargo on the Central African Republic and added incitement to hatred as well as attacks on aid workers as criteria for sanctions.

The council unanimously adopted a French-drafted resolution that would pave the way to targeted sanctions against those fomenting anti-Muslim or anti-Christian violence in the strife-torn country.

Resurgent armed groups in the Central African Republic have resorted to hate speech to stoke tensions, prompting U.N. Secretary-General Antonio Guterres to warn of a risk of ethnic cleansing.

The council condemned incitement to violence on an ethnic or religious basis and decided that any individual or entity that commits such acts or supports them could face sanctions.

French Ambassador Francois Delattre told the council that these “acts of incitement are a scourge for CAR and are at the root of violence that has resulted in too many victims, among civilians and among the blue helmets.”

“There will be no lasting peace in CAR if these acts of incitement continue and the council will shoulder its responsibilities,” Delattre said.

A U.N. panel of experts recommended in its report in December that hate speech be added as a sanctions criteria to shut down appeals for violence.

Since the council set up a sanctions regime in 2013, 11 individuals including former president Francois Bozize and two entities have been hit by a global travel ban and an assets freeze.

The resolution adopted Tuesday added attacks against aid workers as grounds for sanctions after at least 13 relief staff were killed in CAR last year, making it one of the most dangerous countries for humanitarian operations.

An arms embargo put in place in 2013 when the country exploded into violence with the overthrow of Bozize was rolled over to January 2019.

The measure however allows for supplies of arms and other military equipment to CAR’s security forces if these are approved by the U.N. sanctions committee.

Russia last month received the green light from the committee to deliver light arms to units trained by the European Union.

More than one in four Central Africans have fled their homes in the conflict or crossed borders as refugees and 2.5 million people are in need of food aid.

Protesters continue to block the Trans-Canada Highway at the N.S.-N.B. border