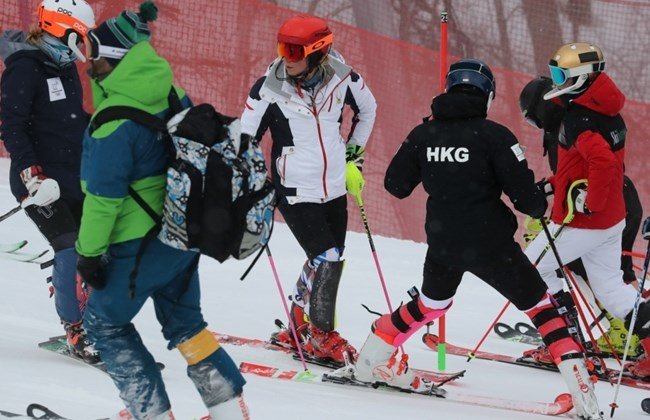 Just because there’s been barely any Alpine skiing at these Olympics – three of the first four races were postponed – doesn’t mean that Mikaela Shiffrin and everyone else gets to just take it easy.

Many of the women whose slalom race was scrapped because of strong winds at the Yongpyong Alpine Center on Wednesday, including American star and defending gold medalist Shiffrin, took a couple of practice runs for the giant slalom that will be Thursday. Men took informal downhill training on a shortened course at the Jeongseon Alpine Center about 30 miles (50 kilometers) away.

There’s also plenty of other work to be done – by the skiers, their coaches and the organizers.

“Everyone is like: ‘Are you waiting around?’ You’re not really waiting, because you’re keeping yourself – body and mind – ready to go,” U.S. racer Megan McJames said. “You’re training on snow. Dry land training. Physical therapy. Everything you’d do on a normal day to keep yourself in the best possible position to compete.”

Which is probably a good thing.

Otherwise, one could get a bit antsy.

“You wait all season for this date, and you are so focused,” said Didier Defago, who won a gold medal for Switzerland in the downhill at the 2010 Vancouver Olympics after it was put off for two days because of a mix of snow, rain and – get this – too-warm temperatures.

“If you have a delay like this,” said Defago, who is helping test the downhill course before the men’s race, “you have to find the real balance between, ‘I can let the tension go a little, but I have to be ready again.'”

Coaches want to keep their skiers fresh, focused and not too annoyed by all of the rescheduling.

“It’s been a difficult few days … (with) the excitement of getting ready to race and the disappointment of not getting to race,” said Shiffrin’s coach, Mike Day. “The more challenging piece, truthfully, has been flip-flopping events every day. If we stayed with one event, the focus can remain singular. Having gone back and forth now, between GS and slalom, and back to GS again, the preparation has been a little challenging. But I feel like we’re in a good place.”

The officials who organize the events must try to balance safety and fairness while making sure they get the 11-event Alpine program completed on time.

Consider the way things have gone so far in South Korea.

“All in all, it’s clear it’s a (backup) plan,” women’s race director Atle Skaardal said. “It’s a compromise. But I think it’s an acceptable one.”

Added Skaardal: “We’re just very, very eager to get a race off.”

The only one that’s been contested was the men’s Alpine combined on Tuesday, which Marcel Hirscher of Austria won.

Even that was deemed unfair by some because the direction and strength of the wind kept changing, giving some racers a boost while hindering others.

All of the uncertainty can turn the sport into a test of mental fortitude as much as one of physical strength and skill.

“Some athletes deal with it really well. They can deal with delays and knowing there are only certain things they can control, and those athletes are usually ahead of the curve in this kind of situation. And then there are athletes that have a harder time with that and like things to be a little more programmed,” U.S. men’s speed coach Johno McBride said. “We try and keep things light around our household and try to keep the boys engaged in stuff so they’re not just sitting around and worrying about what’s going to happen.”

This is nothing new to these folks, though.

All are familiar with delays, postponements and even cancelations during the day-in, day-out World Cup circuit.

This is, after all, an outdoor sport.

“You get used to it,” said McJames, a slalom and giant slalom skier on her third Olympic team. “Everyone jokes that ski racing is, ‘Hurry up and wait.’ … That’s just part of the deal.”

Scotland fights back to beat France 32-26