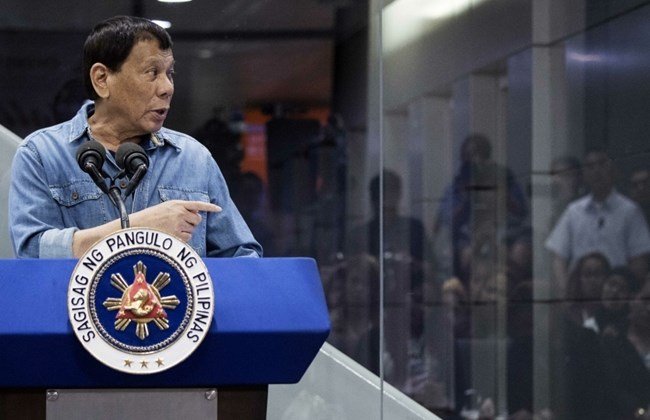 The Philippine president offered a nearly $500 bounty for each communist rebel killed by government forces to save on anti-insurgency costs and said insurgents are easier to hit than birds because they have bigger heads.

President Rodrigo Duterte’s latest crass remarks, which the government issued to reporters late Wednesday, came after human rights groups condemned him this week for saying troops should shoot female communist guerrillas in the genitals to render them “useless.”

“You kill an NPA today and I’ll pay you 25,000” pesos, Duterte said in a speech at an air base in central Cebu city, referring to New People’s Army guerrillas.

“I was computing that if this drags on for four years … it’ll be very expensive because it’s war. If I’ll just pay 25,000 for a life, I can save about 47 percent,” he said to laughter from the crowd.

There was no elaboration on how he came up with those figures and whether or how the government would pay for claimed kills. Backing up his offer, the brash-talking president encouraged state forces to go for the kill.

“If you work really hard to crawl across the forest, you’ll surely be able to shoot even just one. If you can shoot a bird above you, then how much more an NPA whose head is so big?” Duterte said, again eliciting laughter from the crowd.

Regional rebel commander Jaime Padilla, who uses the nom de guerre Ka Diego, said Duterte wouldn’t scare the guerrillas into ending their uprising even if he offers a million pesos for each rebel killed because the rebellion has been fueled by deep social ills such as poverty for nearly a century.

“These are not remarks of a sane president,” Padilla said by telephone. “These are words of a thug or a goon, who reigns like a king in our country.”

He said the guerrillas remain open to resuming stalled talks with the administration despite the president’s “fascist” style.

“Duterte’s pronouncements normalize the idea that government security forces can do as they wish to defeat their enemies, including committing summary executions and sexual violence,” Carlos Conde said, of the U.S.-based rights group.

The volatile president turned up the rhetoric against the communist guerrillas after peace talks brokered by Norway collapsed last year when he protested continuing rebel attacks on government forces. When a rebel leader recently warned that the guerrillas could kill one soldier a day, Duterte countered by threatening to kill five rebels daily and offering to train tribesmen as militias and give them bounties to kill the insurgents.

Duterte is already under international criticism and facing a preliminary investigation by the International Criminal Court for thousands of deaths in the war on drugs he initiated after becoming president two years ago.

He lashed out at his critics and asked why the ICC was focusing on him when atrocities were occurring elsewhere.

“There are Rohingya who are being slaughtered, but they only chose to indict me. OK, you asked for it, let’s have a trial. I will cross-examine you,” Duterte said, a former state prosecutor, referring to Muslims fleeing from violence and persecution in Myanmar.

Related Topics:AsiaNPAPhilippineRodrigo Duterte
Up Next

India, Iran agree to step up efforts to help Afghanistan