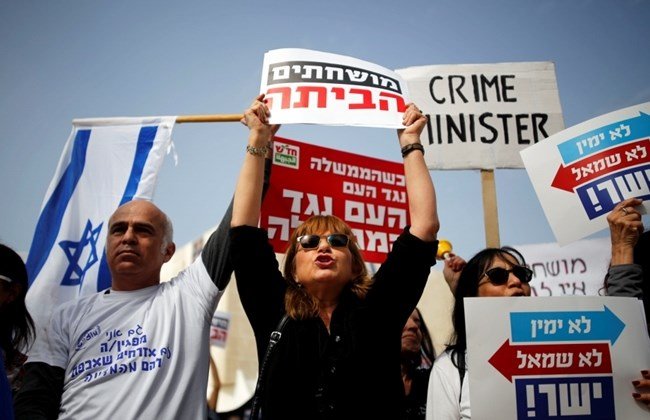 Police said Tuesday enough evidence had been found for Netanyahu to be charged, saddling the four-term premier with one of the biggest challenges to his long dominance of Israeli politics.

Netanyahu, 68, denies wrongdoing in both cases and has said nothing will come of the police investigations. It is now up to the attorney general to determine whether to press charges against him.

Around 1,000-2,000 protesters rallied in a Tel Aviv square, some with signs saying “crooks go home” and “crime minister”.

There is no strict legal obligation for a prime minister to step down over such a case unless he is convicted in court. The right-wing Netanyahu’s governing coalition appears stable for the time being after key partners said they will wait until the attorney general’s decision.

“From a moral standpoint, this is a disgrace to the state of Israel, where a prime minister is suspected of such serious crimes,” Oren Simon said, one of the protesters. “He should go home. Enough.”

A poll published Wednesday showed almost half of Israel’s electorate believe the police rather than Netanyahu.

The poll, aired on the Israeli commercial television channel Reshet, said 49 percent of respondents sided with the police’s version that Netanyahu had acted improperly. Twenty-five percent said they believed Netanyahu. The remainder, 26 percent, said they did not know whom to believe.

Forty-nine percent said he should stay in office, and 43 percent that he should suspend himself.

The first case in which Netanyahu is a suspect involves receiving gifts, including cigars, champagne and jewelry, from businessmen. The second involves discussing a deal with the publisher of Israel’s best-selling newspaper for better coverage in return for curbs on a rival newspaper.

It could be months before the attorney general makes a decision on whether to charge him.