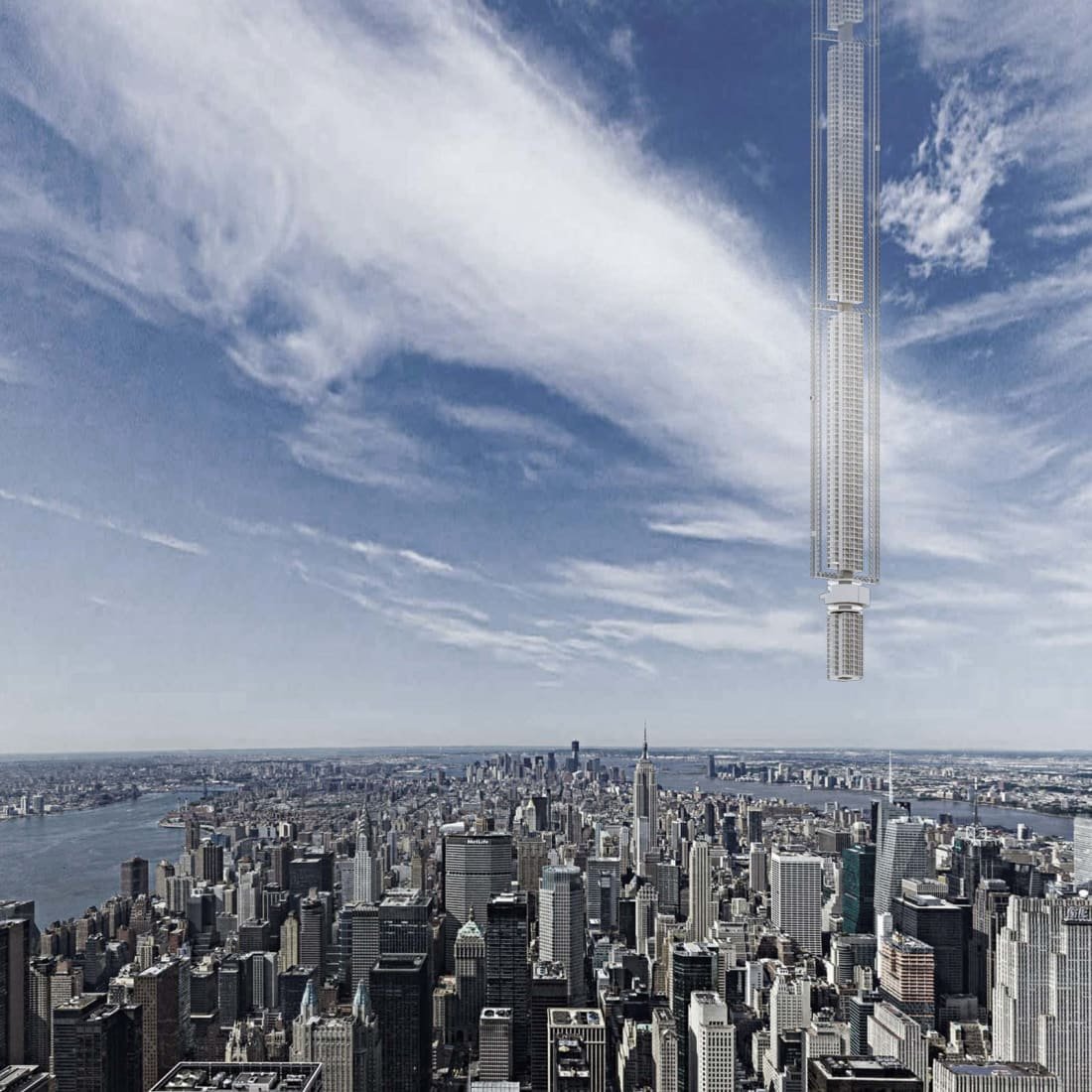 Clouds Architecture Office has unveiled plans for a futuristic skyscraper dubbed the “Analemma Tower.” The building would hover majestically above the ground because it would be attached — wait for it — to an actual asteroid, in space, that is forcibly put into orbit around the Earth.

If that’s not enough to digest, consider that your exact address in this pendulous pad could be anywhere on Earth.The tower will be suspended via high-strength cabling from an asteroid and placed in “eccentric geosynchronous orbit”. In other words, it would be always moving — residents and visitors would take a daily journey between the northern and southern hemispheres with a prolonged visit over a main “home” point like New York City or Dubai.

Advances in space tech could make the vision a reality

In 2015 the European Space Agency’s Rosetta Mission successfully landed on the surface of the comet Churyumov-Geraismenko showing that it is possible to interact with such smaller bodies in space. NASA’s “Asteroid Redirect Mission” is scheduled to send a robot to collect a boulder off an asteroid and then place that boulder into a stable orbit around the moon.

In like fashion, CAO plans to use an asteroid harnessed with high strength cabling reaching towards earth to hold the skyscraper along its journey.

Analemma Tower’s designer Ostap Rudakevych told CNN that the tower could be made of durable and lightweight materials such as carbon fiber and aluminum.

Advances in cable engineering would be needed to achieve the cable strength required to support the structure. Power would come from space based solar panels that have a constant exposure to sunlight.

Water for the tower will be captured from clouds and rainwater and maintained in a semi-closed loop system.

As proposed the top of the tower sits at 32,000m and would be expected to reach speeds of 300mph as it travels through the sky.

How you would hang out

The design leaves some pretty important questions to be answered, like, “What do I do if I want to also have a life on the ground?” “Won’t my family and friends miss me because they will only have a finite window each day in which to see me, and even then, I will be floating above the earth, unable to make contact?”

If you have to ask these questions then, we hate to say it, you are probably not ready to live in a huge mobile asteroid tower, but the designers have your back nonetheless.

Rudakevych said he envisions large passenger drones allowing people to move back and forth between the tower and earth’s surface along with cutting edge electro-magnetic elevators moving people throughout the this fantastic vision.

Currently the proposal calls for the tower to be constructed in Dubai which has a long history of building tall and stylish skyscrapers at a fraction of the cost of U.S. based construction.

When asked what inspired such a project, Rudakevych said, “Since humans have emerged from caves our buildings have been growing ever taller and lighter. We believe that some day buildings will break free from earths surface, releasing us from harmful floods, earthquakes and tsunamis. Analemma Tower is a speculative idea for how this might be achieved some time in the future.”

Is ketogenic diet good for brain and quick weight loss?