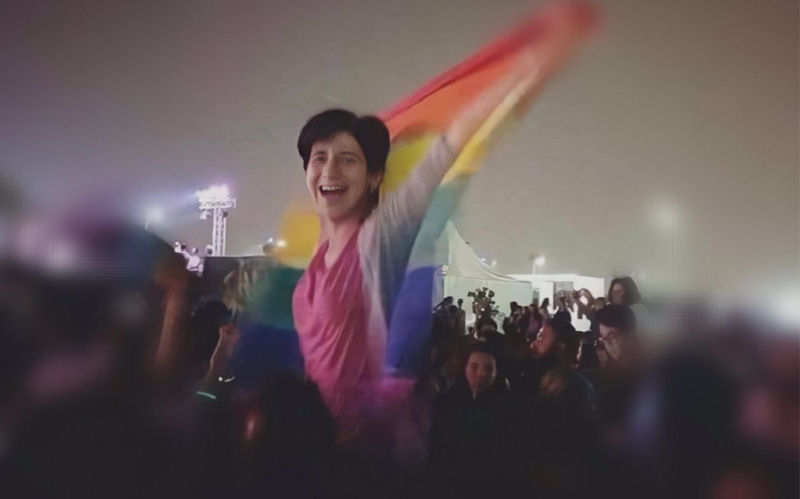 The LGBTQ+ community is mourning the loss of Egyptian activist Sarah Hijazi, who passed away over the weekend.

The 30-year-old LGBTQ+ campaigner died in Canada where she has been living since 2018.

Press reports and activists on social media have posted that she committed suicide after suffering from depression.

Sarah made headlines in October 2017 when she was arrested by Egyptian authorities for waving a Pride flag at a music concert.

She was sat on the shoulders of a friend when pictured waving the rainbow-colored symbol for the LGBTQ+ community while watching Lebanese indie-rock band Mashrou’ Leila, that includes queer members.

Sarah was forced into prison for the harmless act and wasn’t released on bail until January 2018. She then moved to Canada.

Egyptian prosecution accused her of joining a banned group in the country which they describe as promoting “deviant thought”.

Although homosexuality isn’t illegal in Egypt, there are laws that prohibit “deviant thought, promotion of immorality, and acts contrary to public morals.”

LGBTQ+ people in Egypt are seen by the authorities and society as “pariahs” and the local queer community faces grave challenges living openly.

Many social activists have paid their respects to Sarah Hijazi after finding out about her tragic passing.

tw: suicide
Sarah Hijazi, a queer egyptian activist who was imprisoned for raising the rainbow flag at a concert in cario, lost her battle with depression last night. we will continue your fight Sarah ❤️
إِنَّا لِلّهِ وَإِنَّـا إِلَيْهِ رَاجِعُو pic.twitter.com/TMvtOIxqah

Sarah Hijazi, from Egypt, this photo was the reason she was taken to jail in 2017 where she was abused & sexually harassed. She was unable to handle the trauma or the treatment she got even after leaving prison and going to live in Canada Sarah Hijazi committed suicide yesterday pic.twitter.com/jeEDNu6Y3A

She had such a beautiful smile. She’s right, the world is cruel. Let’s continue to fight to make it better. For Sarah’s sake and for anyone who has been made to feel hopeless like Sarah did. May she rest in peace ??❤????

i don’t care whether you’re religious or not or support the LGBT community or not, what happened to Sarah Hijazi is an example of why we should respect people as HUMAN BEINGS first, even if we disagree with their personal lifestyle & their actions (which don’t harm or affect us).

Sarah Hijazi was an Egyptian woman who flew a gay pride flag at a Mashrou’ Leila concert in 2017. She was tortured and raped in prison by the US-backed Sisi government for her activism. After escaping to Canada a year ago, she committed suicide yesterday.