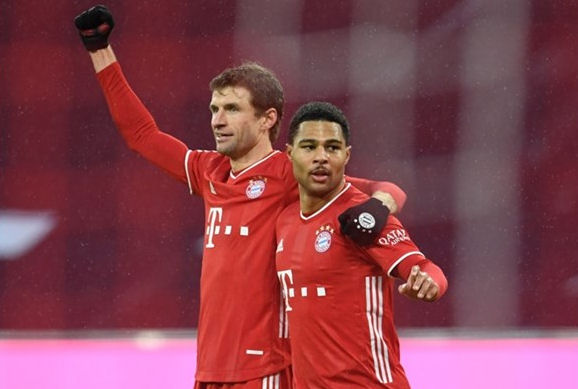 Bayern Munich crushed visitors Hoffenheim 4-1 Saturday with four different scorers, to go provisionally 10 points clear at the top of the Bundesliga in their quest for a ninth consecutive league crown.

The Bavarians, who have now won four games in a row after losing 3-2 to Borussia Moenchengladbach earlier this month, were lucky not to fall behind after Ihlas Bebou twice failed to score in front of goal in the opening minutes.

Central defender Boateng restored order when he rose high to connect with a Joshua Kimmich corner and head in after 32 minutes for his first goal in three years as Germany coach Joachim Loew watched from the stands.

Bayern looked unaffected by the absence of winger Corentin Tolisso, dropped for a game and fined by the club for breaking coronavirus health and safety rules, and took a two-goal lead when Mueller scored two minutes before halftime.

Mueller, who had hit the crossbar in the 15th minute with a fine chip, has now scored 10 goals, piling further pressure on Loew to recall him to the national team for the European Championship this summer.

Along with fellow World Cup winners Boateng and Borussia Dortmund’s Mats Hummels, Mueller was dropped back in 2019 after Germany’s first-round World Cup exit a year earlier.

Bebou partly made amends for his earlier misses in the 44th, curling a superb cross for Andrej Kramaric to volley in and cut the deficit.

The hosts, however, restored their lead with top scorer Lewandowski tapping in a Kingsley Coman cutback for his 24th goal of the campaign.

Gnabry sealed their win with a shot from a tight angle in the 63rd, his first goal since October, as Bayern set a club record with 57 goals in 19 league games.