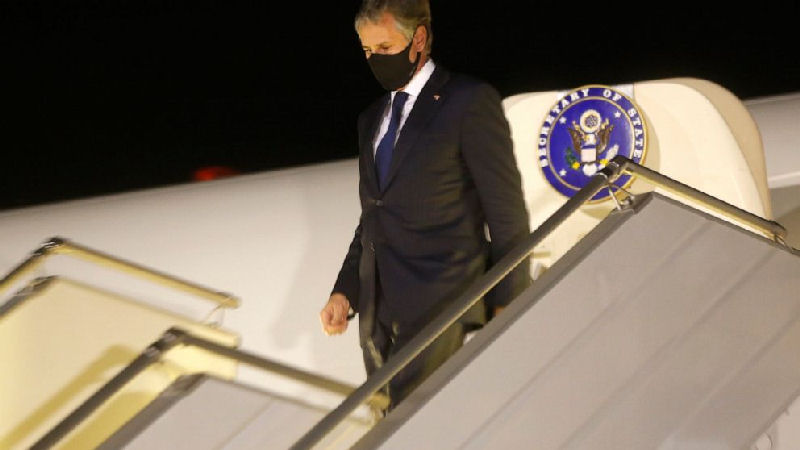 KYIV, Ukraine — On the frontlines of the battle against Russia-backed separatists and in the halls of government in Kyiv, Ukrainians hold strong hopes for Thursday’s visit of the U.S. secretary of state — increased military aid and strong support for NATO membership among them.

By visiting so early in his tenure, before any trip to Russia, Antony Blinken is signaling that Ukraine is a high foreign-policy priority for President Joe Biden’s administration. But what he can, or will, deliver in the meeting with President Volodymyr Zelenskyy is unclear.

Blinken said Monday in London that he would use the visit to show “our unwavering support for the independence, sovereignty and territorial integrity of Ukraine.”

Zelenskyy has made it clear that he wants significant action.

“Ukraine needs a clear signal about the European and Euro-Atlantic prospect,” Zelenskyy said Monday on Twitter, referring to Ukraine’s aspirations to join NATO and the European Union. “Postponing these issues for ‘later,’ ‘some day,’ ‘(in) 10 years’ has to end.”

“We need to be more supported, given some special status — NATO membership,” said a Ukrainian soldier on the eastern front lines, who gave his name and patronymic as Vasyl Adolfovich. “It would be good if we were more protected by this bloc and there would be support.”

Soldiers’ anxiety is high amid an increase in attacks this year, After a long period of tense quiet last year, 34 Ukrainian troops have been killed this year by firing from the separatists.

On Wednesday, a separatist artillery shell fell outside a hospital building in the town of Krasnohorivka near rebel-controlled territory, damaging part of the hospital’s ward for treating coronavirus patients and cutting off electricity in the whole building.

Russia, which claims its soldiers are not on the ground in eastern Ukraine, caused fears to soar this year by conducting massive military exercises near the border with Ukraine. Russia said late last month that it has pulled the forces back to their bases, but Kyiv saw the drills as ominous.

“The armed aggression of the Russian Federation against Ukraine continues,” said a soldier who identified himself only as Sergey. “This … violates world security standards,” he added. “The whole world must cut off and stop this aggression.”

Foreign Minister Dmytro Kuleba said Ukraine now is worried about Russia’s announcement last month that it was redeploying warships from its Caspian flotilla to the Sea of Azov, an extension of the Black Sea that borders Ukraine and Russia.

“There is now a big threat in the Sea of Azov; it is unprecedentedly large,” Kuleba said Monday.

Efforts have stalled to end the conflict in eastern Ukraine, which has killed more than 14,000 people since it broke out in 2014. Zelenskyy has called for the United States to try to push these efforts forward by joining the negotiations of the “Normandy Format” that consists of Russia, Ukraine, Germany and France. Russia is almost certain to oppose any U.S. involvement in the negotiations.

“Ukraine wants not only to receive encouraging political signals, but wants the United States to take a clear and very tough position on the further integration of Ukraine into NATO, so that the United States acts not just as a lawyer for Kiev, but as an insisting party,” Fesenko said.

The U.S., meanwhile, expects reassurance from Ukraine that it is determined to fight endemic corruption. The State Department last week expressed strong concern about the government’s decision to fire the reform-minded head of the state oil and gas company.

“There is a lot of hard work to be done to ensure a brighter future for all Ukrainians,” the top U.S. diplomat for Europe, Phillip Reeker, said.